By: Eugene Yiga
Heads you live, tails you die. That pretty much sums up the fate of Adam Lerner (Joseph Gordon-Levitt), a 27-year-old radio producer who seems to be living the good life. After being checked out for back pain that he thought just resulted from too much running through Seattle's streets, his aloof oncologist gives him even more painful news. He has a rare form of cancer in his spine. His chances of survival? About 50/50. 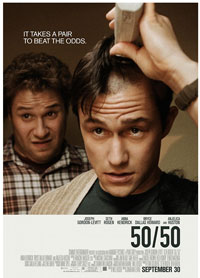 The people in Adam's life react to this news in different ways. First there's his sometime girlfriend (Bryce Dallas Howard), a self-centred artist who chooses to stay with him out of obligation and guilt despite her inability to deal with the "negative energy". Then there's his mother (Anjelica Huston), an overbearing woman who almost wants to make things worse just so she can make them better again. And let's not forget his co-worker and best bud (Seth Rogen), the man-boy yang to his yin who sees the diagnosis as a chance to play the sympathy card and get them both laid.

About as warm as a slap from a sea otter

But Adam's most fascinating relationship is the one with his therapist (Anna Kendrick). He initially refuses to open up to someone three years younger than him (she doesn't even get his joke about her being like Doogie Houser), especially as she's only ever treated two patients in her life. Plus her awkwardly eager attempts to place her hand on his shoulder reassuringly are about as warm as a slap from a sea otter. As expected, their relationship soon grows and Adam gets to explore a side of himself he's kept guarded for so long.

50/50 might be thought of as half comedy and half drama, but the balance is so fine that it never goes too far either way. As a comedy, it isn't side-splittingly funny. Most of the one-liners (delivered effortlessly by Rogen) are too subtle for that. There were a few laugh-out-loud moments, but the dark humour is mostly to take the weight off a serious subject, not to cross the line and become insultingly glib.

As a drama, it isn't depressingly grim. There are a number of tender, and sometimes painful, scenes that will definitely get to anyone who's been affected by cancer. It's good that the movie avoids manipulative tugs at your heartstrings, but sometimes it steers too far from what could have given it more depth. The relationship that Adam develops with his chemo buddies was fertile ground for exploring the long-term impact that illness has on us and those we love. And the relationship with his mother, already taking care of a husband with Alzheimer's, could have done the same (or at least given more scenes to the wonderful Huston).

For the most part, director Jonathan Levine keeps it real and in many ways - including a scene in which Gordon-Levitt actually shaves his head - that's exactly what this is. The movie was inspired by the true story of Will Reiser, a comedy writer who was diagnosed with spinal cancer in his early 20s. Seth Rogen and Evan Goldberg, his real-life friends and co-writers on Da Ali G Show¸ encouraged him to write the screenplay that eventually became this movie.

I suppose that's why Rogen comes across as the lovably crass guy he's played in movies like Superbad and Knocked Up. He's being himself! Still, the role does feel like more of the same. Expect additional typecasting in Howard playing the pretty mean girl, like she did in The Help, and in Kendrick playing the inexperienced newbie who thinks she knows it all, as she did in Up in the Air. I really liked Gordon-Levitt as Adam, which makes me wonder what the movie would have been like if James McAvoy (the new Professor X) hadn't pulled out at the last minute.

All in all, I really enjoyed 50/50. Nobody likes to accept the scary fact that young people can die, so it was good to see a movie go there. Again, it comes down to the beautiful balance that it struck between pleasure and pain. I suppose that's quite telling about life itself. Things are messy, which is why happy and sad can coexist. (A woman sitting near me in the cinema was openly sobbing one minute and then chuckling away at the next.)

A movie about self-discovery

Ultimately, this is a movie about self-discovery. It was quite fascinating to watch Adam, such a polite perfectionist and people pleaser, slowly come undone. Instead of pretending he was okay and reassuring everyone that things would be fine, he went through the anger, the depression, and the fear. (A late-night car scene in which he lets it all out was especially powerful.) It was also great to see him finally stand up for himself and live a little too. It's a pity that our breakthroughs often require breakdowns, but it's always good to dig a little deeper to uncover new sides to who we are.

What I loved most about 50/50 was the reminder that friendship and love have the power to overcome anything. When one of my high school friends died suddenly a few months ago, it was the support that my best buddies and I gave each other that helped pull us through. That's why I found it quite touching to see how much Rogen really cared, even though he didn't (or couldn't) always show it. Sometimes that's all you can ask for. And sometimes it's all you really need. 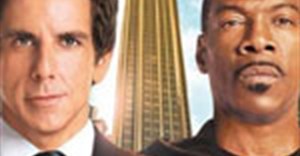