7 Dec 2022 | Email | Print |   PDF
Issued by: OnPoint PR
A new era dawns in the music industry and a bold new collab is blazing a trail into the future. The Loop x Jay Em NFT Project recently launched at Saint Restaurant in Johannesburg. The event showcased Loop's metaverse space in Decentraland and highlighted the label's ability to transition artists seamlessly between the physical and virtual worlds. Artists perform in real life (RL) and simultaneously as their avatars in the metaverse and musicians and technicians who worked on the album are given access to the Loop Decentraland and Discord spaces. This was a first-of-its-kind event for the music industry in South Africa.

This new generation of experiences is powered by Web3, and the rising talent of Jay Em, a duo of South African brothers whose first track, Bust Your Windows, went viral on sharing platform Datafilehost

“How we access and consume music is evolving rapidly,” says Andreas Kyriacou, chief technical officer of Feel My Flo, “and the Loop x Jay Em NFT Project is going to change how we do that dramatically.”

The project brings together two of the most exciting technological developments to emerge in recent years, the decentralised power of Web 3.0 (also known as Web3) and NFTs (non-fungible tokens). Used together, they are about to change the way music lovers experience and engage with the artists and tracks they love the best.

While Web 2.0 brought the ability to engage online, and swept in the phenomenon of social media for artist to connect with fans on other platforms, Web3 brings a array of capabilities that has the potential to shift the power dynamic of the internet away from giant tech entities and put it back into the hands of individual users and creators. Allowing them to build their own platforms, and retain ownership of their art, within their own communities. In its current form, Web3 rewards users with NFTs, which can be used in a number of different ways, including as tradeable artworks or as votes to influence the future of technology.

“It’s a wicked combination of emerging platform capabilities and a new way of trading,” say brothers Waven and Ruwayne of Jay Em.

So how does the Loop x Jay Em NFT Project work?

“NFTs are unique tokens of secure digital content that can be traded in some way or another,” says Kyriacou. “They come either as digital artworks that are traded as collectables or as tokens that provide access to online community spaces in the metaverse, such as those in Decentraland, a decentralised virtual reality platform powered by blockchain technology.

“In the latter form, they’re essentially the gateway to modern-day fans clubs, where new work can be launched directly and exclusively to members or where they can access purchasable items such as concert tickets, branded merchandise and more.” A total of 1,000 unique audio NFTs will be created and launched by the Loop x Jay Em NFT Project. These will include an EP containing five music tracks to enjoy and own, each accompanied by a unique digital artwork. The tracks will include If I Had You, featuring Micasa lead singer and My Kitchen Rules host, J’ Something. They will also provide shared ownership of the copyright to the music and a percentage of any royalties or other income derived from licensing the tracks.

The cherry on the top is that NFT owners will stand a chance to win a pair of Jay Em’s favourite kicks signed by all of the artists who worked on the EP, including J’Something, Ziyon, Thandie Phoenix, Lee Cole, Nifty Sax and Fifi Rong.

“The objective of the project is to draw attention to and popularise what is essentially a new asset class in the field of music,” says Kyriacou, “a class in which the best of contemporary music meets digital art.”

There’s no doubt about it: The Loop x Jay Em NFT is a glimpse at the future of music history. 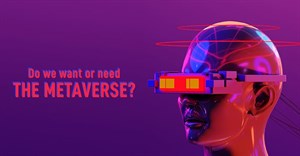 Brand AvatarDo we want or need the metaverse?11 Mar 2022