By: Eugene Yiga
My first visit to Galbi almost didn't happen. Even though the restaurant is visible from Long Street, actually getting inside it required navigating through a back alley and past some shops in an obscure Cape Town mall.

On entering the venue - with walls the colour of autumn, Chinese lanterns hanging from the ceiling, and wooden slats dividing up the space - it was still hard to know what to expect. However, it soon became clear that this wasn't just another hole in the wall. Diners can cook their own food

Galbi is based on the traditional Korean barbeque concept (the word means "rib"). Each table is fitted with a small sunken grill so that diners can cook their own food. (Brass extractors do their best to funnel away smoke, some of which still gets in your clothes.)

At first glance, the menu contains an overwhelming number of choices - some familiar, some exotic - which makes it easy to find yourself unable to decide. In cases like this, a good option is to go for one of four set menus, perfectly designed for two.

A range of appetisers

Owners Coenraad Groenewald and Louis Smit have chosen to keep the portion sizes small and prices on the low side, making it possible to try several different options in one sitting. That's how I found myself eating warthog fillet and kudu loin for the first time (narrowly beating out zebra and springbok), both of which were quite good.

Galbi offers a range of appetisers (including eye-watering Jalapeno chillies stuffed with cream cheese and chives, and wrapped in streaky oak-smoked bacon) as well as a few vegetarian options (including surprisingly tasty tofu squares with green chilli, walnuts, and garlic). 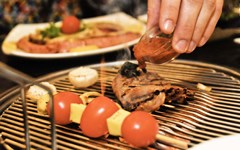 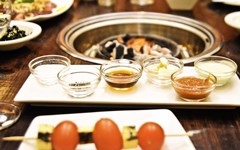 Waiter available at the push of a button

Given my limited experience in the art of braai, I was a little hesitant at the idea of cooking my own food. And even though the waiter was available at the push of a button (each table has one), I was coached by a friend and (mostly) did the cooking myself.

In the end, the meat turned out a bit tougher than I would have liked, although I suppose I have nobody to blame for that but myself. Then again, I now have even more of a reason to perfect my skills by going again!