By: Eugene Yiga
The Mayans were right: 2012 is the year that the world will end. But how? It turns out that a planet called Melancholia has been hiding behind the sun and is about to make its debut. Scientists think it will simply pass by Earth, the way that it passed by Mercury and Venus. But it could also come a little closer than we'd like, pretty much killing us all. 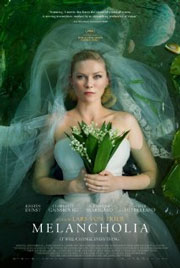 This isn't good timing for Justine (Kirsten Dunst, who won the Best Actress prize at Cannes). She's a successful copywriter about to marry the man of her dreams in an elaborate wedding at a beautiful countryside estate. Then again, the end of the world probably isn't her biggest concern. Behind the sunny surface lies her own melancholia, a paralysing condition that turns her wedding into a disaster.

This is also very bad timing for her sister Claire (Charlotte Gainsbourg). Ever since the wedding, her main focus has been on getting Justine well. But she's also worried about the potential Armageddon. Her husband (Kiefer Sutherland, how we've missed you!) tells her that everything will be fine. But is he right? What if the world really is coming to an end? Can these sisters mend their broken relationship in time? Or does none of it even matter at all?

Not a typical disaster movie

Right from the opening images (reminiscent of Terrance Malick's Tree of Life), it's clear that Melancholia isn't a typical disaster movie. In fact, it's about as calm a movie as they come. Sometimes, in the course of over two hours, it gets so calm that you wish the planets would hurry up and collide. None of this is helped by the fact that the same musical theme (from Wagner's Tristan and Isolde) keeps coming back. And yet the whole thing is still quite beautiful to watch.

Director Lars von Trier seems to have based Justine on his own life. In addition to suffering from severe depression in the past, his unexpected comments when the film premiered at Cannes last May left a lot of people rather shocked. "What can I say?" he remarked. "I understand Hitler, but I think he did some wrong things, yes, absolutely. He's not what you would call a good guy, but I understand much about him and I sympathise with him a little bit." Um, seriously?

Faux pas aside, Melancholia raises some interesting questions about whether or not there's a point to any of what we do if we're all going to die. Justine thinks that there isn't. "Earth is evil," she says. "We don't need to grieve for it. Nobody will miss it."

But Claire has a different view. That's why she makes such an effort to reconcile with her sister even as the end is approaching. As far as she's concerned, that has to count for something. Given that a world so devoid of meaning would probably have been destroyed ages ago, I'd have to agree.