By: Angie White
Patrick Thomas is a British graphic artist who has anxiously awaited the opportunity to attend Design Indaba. He stepped on stage enthusiastically greeting the audience with a "Goeie môre!" and thanked Design Indaba founder, Ravi Naidoo for the invitation and for all the great work that the event does and inspires. He also thanked the collaborating schools and sponsors who assisted him during his time in South Africa.
Kicking off his presentation, Thomas explained that Naidoo has always struck him as someone that likes to roll his sleeves up and get to work, and this is something that he admires. He went on to name the various schools that collaborated with him, namely Vega School in Pretoria and Johannesburg, Inscape in Durban, and Red & Yellow and Vega School in Cape Town.

In 2011, Thomas published his first book, Protest Stencil Toolkit. The book was inspired by and comprises universal icons and symbols that people use, with the focus on icons of the 21st century, aiming to get people to be more active in using icons and visual ideas. He used the composition of this book as a way to collaborate with others to create protest graphics and show people his work.

Next, Thomas introduced the Breaking News project, a real-time graphic response to live news, using processing and coding software. Referring to the current ‘era of fake news’, the project aims to bring truth back to news by compiling ‘news’ from people in public spaces via an RSS feed. This is then scrambled amongst other news. Breaking News has encouraged members of the public to engage with how news is received, processed and understood. This ongoing project has since been realised in Manchester, London, Seoul, Novi Saad and Rome.

During his time in Rome, while working on Breaking News, Thomas kept a journal of designs, icons, images and text. He explained the difficulty he faced in printing material in Rome, eventually only being able to print by way of a black and white laser printer. This led him to create layers of material from different eras and pooling them to create Open_collab, a free online info pack which was distributed virally throughout the world.


Thomas believes that Open_collab shares the philosophy of Design Indaba, which is the idea of bringing people together to work together. Open_collab does this by encouraging and enabling collaborations between creatives through this free international workshop that allows participants to experiment in a collaborative environment.

Open_collab essentially provides juxtapositions of content in order for creators to see their content from a different perspective, inspiring further creativity.

How to collaborate with Open_collab

Co-developer of Open_collab, Jonathan Auch, joined Thomas on stage to demonstrate the functions of the website as well as the live render of mixed type and image layers and how they are created.

Auch talked through the menu items focusing on the ‘Create’ function which incorporates topics that people have had on their mind, and offering a place for people to download and experiment with ideas and designs and/or re-upload different design layers for others to use. Auch jokes that the biggest challenge they’ve faced regarding the platform is that people enjoy experimenting so much that they have trouble getting back to work.

Demonstrating how the layers work, Auch described the process as combining visuals or ‘layers’ of image and text/type to produce various patterns/designs. He explained that if there are 100 layers multiplied by another hundred layers, you’ll be able to produce 1,000 different combinations of designs. Since they’ve been in South Africa, Auch and Thomas say local creatives have collectively submitted 242 images and 231 texts, which has equalled to 55,902 possible combinations, effectively mapping the South African creative landscape. 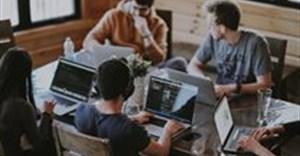 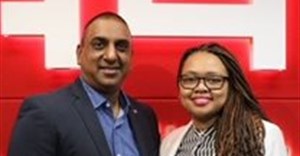