AfricArena have secured over $222m in funding over the course of five years...

Section 12J funds are playing a crucial role in the re-booting of South Africa's economy by creating employment opportunities and saving businesses, while at the same time facilitating significant tax benefits to investors...

Covid-19 pandemic: How UbuntuCare is helping women in impoverished areas earn an incomeArticle

Thanks to non-profit initiative UbuntuCare, more than 300,000 cloth masks have been distributed to vulnerable communities throughout the Western Cape... 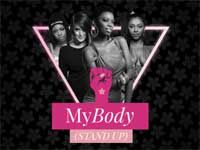 Produced in 1983 and taught in schools around the world, ‘My body’, a song originally developed as part of a sexual abuse prevention programme, has been given a reboot to raise funds against women abuse in South Africa. The new track features artists including Lira, Juliet Harding from GoodLuck, Mariechan, who rose to fame as one third of the girl group, Jamali, and Gigi LaMayne. All funds raised from the streaming of 'My Body' will be donated to the 1st for Women Foundation for its ongoing fight to end woman abuse.

SA artists, 1st for Women partner on powerful reboot of 'My Body'Article

Produced in 1983 and taught in schools around the world, "My Body", a song originally developed as part of a sexual abuse prevention programme, has been given a reboot to raise funds against women abuse...

Quote This Woman+, an organisation which works to amplify the voices of women in the media, launched a fundraising campaign...

The Sunflower Fund partnered by DKMS will be hosting a webinar on Thursday, 12 November, titled 'Powered by Purpose' as part of its Sunflower Day celebrations...

The economic impact on the tourism industry - a key funder of conservation in Africa, has been crippling, leaving Africa's wildlife under threat...

In partnership with the National Cycling Academy Forum (NCAF), and supported by Coronation Fund Managers, Ride2Live has launched the #RideWithMe campaign...

The Cape Winemakers Guild has announced the wines that will form part of the 2020 Nedbank CWG Auction, which will be hosted by Bonhams on Saturday, 3 October 2020 from 12pm (London time)...

The private equity industry's resilience in the face of weak macroeconomic circumstances during the 2019 bodes well for the industry's ability to navigate the Covid-19 crisis...

Over 300 chefs took to their stoves on Mandela Day, producing 77,455 litres of soup to feed the vulnerable in South Africa...

Bonhams to host the 2020 online Nedbank CWG Auction in OctoberArticle

Bonhams will host this year's online Nedbank Cape Winemakers Guild Auction - which will be held live on the Bonhams website on Saturday, 3 October 2020 from 12pm (London time)...

Now, more than ever, business SA is needed to lend a heroic hand...

Up the Creek goes online with relief showArticle

Up the Creek has joined forces with some key players in the industry to put together an online show on Saturday 6 June to raise much needed funds for the events industry...

The Shoprite Group has thanked its customers for reaching the R1m mark in funds raised for the Solidarity Fund, and matched customer contributions with another R1m...

The Gray philanthropy ecosystem in South Africa has made available R180m of funding to assist with the economic, educational and medical shortages created by the coronavirus crisis...

The DreamStream Festival will be held from 24-26 April 2020. The streaming festival is aimed at raising funds for the unsung heroes of the entertainment industry...

1st for Women Insurance and donations-based crowdfunding platform, BackaBuddy have teamed up with Gift of the Givers and Vula Mobile to create a dedicated online crowdfunding campaign for nurses...

Gift of The Givers is crowdfunding via the BackaBuddy platform in support of the medical staff and facilities on the frontline of the Covid-19 pandemic, who will be treating the affected...

2019 JBX and Jackalberry Challenge nears the R1m mark in fundraisingArticle

Spurred on by a worthy cause, cyclists traversed hundreds of kilometres during the 2019 JBX and JackalBerry MTB Challenges to raise over R750,000 for the Ubuhle Christian School in Bronkhorstspruit...

The Garden Route in the Western Cape is the perfect place to unwind during short breaks, long weekends and family holidays...

If National Treasury retains the changes on S12J investments, individuals and trusts will now only be allowed to invest R2.5m per annum and corporate investments will be capped at R5m per annum...

In October, the Chairperson and co-founder of the Adopt-a-School Foundation (AAS), President Cyril Ramaphosa, addressed over 700 industry leaders at the Foundation's 13th annual 'Back to School' Party...

What started as a simple video clip on Facebook has grown into one of the fastest-growing pages globally on Facebook...

There is no doubt about the strong link between tourism and conservation. Many countries are taking advantage of wildlife tourism to help protect endangered species...

The Strauss & Co Fine Wine Auction is set to take place on Saturday, 14 September from 10am at The Westin in Cape Town. The sale features 376 lots of the finest local and international wines, including benchmark vintage wines from Meerlust, Kanonkop, Sadie Family, Klein Constantia and many more, along with the finest from Bordeaux...

Sun Exchange has announced that it will be launching a R7 million Uprise.Africa equity crowdfunding campaign...

The winners of the Art, Design and Textile Design ComPETition, presented in association with Hill's Pet Nutrition and Domestic Animal Rescue Group, were announced at the Cape Town Homemakers Expo...

Celebrate every step with the Algoa FM Big Walk for CancerArticle

Waves of pink-clad walkers will colour the Port Elizabeth beach-front for the 21st annual Algoa FM Big Walk for Cancer on Saturday, 26 October...

Mo Abudu: Woman of many firstsArticle

A trailblazer in changing the negative narrative about the continent of Africa...

Conference calls on women to embrace - not fear - technology disruptionArticle

The 20th annual Women in Business Conference on 16 August at the UCT Graduate School of Business will be bringing together industry leaders to explore how female disruptors can win in a world transformed by technology...

There's a need for more disruption in Africa's tech sceneArticle

The business opportunities that have changed the fortunes of the continent and how these businesses are impacting and transforming the quality of lives in Africa...

International Bartender of The Year hosts masterclasses in SAArticle

Joe Schofield, reigning "International Bartender of The Year 2018" and one of the more recognised names in the global bar industry, is set to land on South Africa's shores June 2019...

The Cape Town Homemakers Expo has launched a competition ideal for animal-loving designers...

HospiceWits Night with the Stars to close SA Fashion WeekArticle

The 2019 HospiceWits Night with the Stars will close off SA Fashion Week at Sandton City in Johannesburg on 7 April 2019...

The National Assembly has approved the Division of Revenue Bill and the Financial Matters Amendment Bill...

The unmistakable style of givingArticle

Luxury apparel brand, Fabiani, in partnership with the TFG Foundation, has reached its R1m milestone in support of much-needed initiatives at The Red Cross War Memorial Children's Hospital...

The 16th edition of the Shoprite Checkers OFM Chip for Charity will take place at the Bloemfontein golf club and promises to be a fun-filled day of golf with clients or friends - all for a good cause...

Over R1m was raised for the Nelson Mandela Institute for Education and Rural Development at a recent gathering in San Francisco...

Durex, together with The Global Fund and Gates Foundation, will donate a total of $10m to benefit charities in southern Africa...