Go Beyond the Mind with Gilan Gork

By: Eugene Yiga
It all started with a magic kit at the age of five. Because Gilan Gork's parents owned an educational toy centre and supported his passion by bringing home enormous magic sets from international toy fairs, it wasn't long before he began performing at charity events and professional gigs. Now, after a lifetime mastering his craft, Beyond the Mind demonstrates his ability to read minds, bend spoons, and a whole lot more.

Many people have seen mentalists like Derren Brown on TV but are still sceptical about the whole thing. I guess that's why the audience applause was so hesitant at the start of the show. And even though all volunteers were randomly selected (by catching silver balls thrown into the crowd), it didn't help that some aspects of the two-hour performance were a bit too complicated to convert the non-believers. 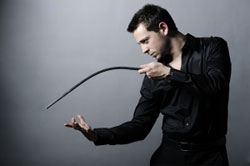 Take the lucid dream part as an example. I first read about the technology of "downloading dreams" in Fortune Magazine several years ago. Then I saw it in action on an episode of House. But using electrodes to connect a volunteer to a blinking machine so that we could watch her thoughts in real-time (and 3D) was still a bit out there. And as much as the lucky lady later expressed how real it felt, I still didn't quite get it.

Much easier to understand and believe are the more tangible elements of the show. These include the hidden spike trick (check out Keith Barry's Ted Talk or search for some hidden spike trick fails if you're not too squeamish) and bending metal with the mind. For the latter, Gork went from being charmingly charismatic to rather intense. He recalled his childhood sitting at the dinner table and wishing he could bend spoons, almost as though channelling thoughts of his family and friends gave him strength. Then the theatre grew eerily quiet, mostly because we couldn't believe our eyes. Cutlery (brought by the audience to make sure it wasn't phony) was bent to the extent that a tablespoon basically melted in half. It was one of the strangest things I've ever seen! And while some people might have appreciated an explanation, others were content to sit in awe.

Is he a magician? A psychic? Or something stranger? "I have no supernatural powers," Gork explains. "I have simply unlocked abilities that we all already possess. My passion is in enhancing your experience; to pull you into the mind, where everything is possible, and then back into reality with inspired perspectives." In other words, Beyond the Mind isn't just about a guy showing off some fancy tricks (although his mind reading on Carte Blanche and in the show's "human lotto" is quite impressive). Instead, it's about helping us see that we're all so much more powerful than we realise. It's about removing the limitations we place on ourselves so that nothing stands in the way of achieving our goals.

"My best audience reactions are when people come up to me after the show to let me know that they feel inspired and empowered towards their own personal potential," Gork says. And because mentalism is more about understanding people and less about simply reading minds, he suggests we work on our personal development by reading books and taking constructive action to improve our lives every day. (Practical Mental Influence and other titles by William Walker Atkinson are a good start.) Then we should apply what we learn so that we can connect more easily with other people, something we need to master if we want to be successful in life. From there, the mind's the limit!

Beyond the Mind with Gilan Gork is showing at Cape Town's Theatre on the Bay until 24 November. Tickets are available from Computicket. For more videos and information, visit www.gilangork.com.