By: Eugene Yiga
London comes to Cape Town in The Quartet, a new production about four opera singers preparing for a performance at their retirement home. Just because you might not be a senior citizen who loves Verdi, doesn't mean you won't find something to appreciate in this wonderful play.

Wanda Ventham, who has made numerous television appearances and is the mother of actor Benedict Cumberbatch (Sherlock), is Cissy. She longs for the good old days, but might also be losing her mind. John Fraser, who has also made a name for himself as a playwright and novelist, is Wilfred. His life seems to revolve around naughty jokes and the pursuit of Cissy's love. Delena Kidd, one of the founders of the London Shakespeare Group, is Jean. Once famous and rich, she's now down on her luck and forced to move into the home. And Gary Raymond, who starred opposite Katherine Hepburn and Elizabeth Tailor in the movie Suddenly Last Summer, is Reginald. His plans to retire in peace are put on hold when Jean comes back into his life. 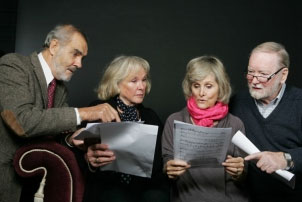 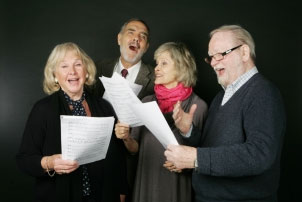 The acting as is absolutely brilliant, which is to be expected from an ensemble of accomplished stars. Each role demands a different kind of energy and the fact that each actor is able to capture the respective identifies with such nuance keeps the performance rather fresh. I've always been impressed by the fact that actors are able to memorise such lengthy scripts (the play is about two hours long) and, as Ventham's husband mentioned when we spoke, it's even more impressive when you consider that these are professionals in their mid-70s and beyond.

Even though it's dubbed as a comedy, classifying The Quartet this way feels somewhat limiting. Yes, there are some rather funny bits, but most of the jokes are directed at older audiences (or people who know what "surgical stockings" actually are). I found the underlying message a lot more impactful and I think those who look a little closer will feel the same way.

This is a play about our pain from the past and our longing to be the people we once were. It's also about our fear of the future and our worries that we'll lose some combination of our friends, talents, or looks, never to get them back again. Given that the play is written by Sir Ronald Harwood, who received an Oscar nomination for The Diving Bell and the Butterfly, and won an Oscar for The Pianist, painful issues like these are probably expected.

About embracing the present

Fortunately, The Quartet isn't designed to leave you depressed. That's because this play is also about embracing the present. We might as well get over the past because all the experiences we have define who we are. And we might as well stop worrying about the future because the beauty of life comes from the fact that it's a perfectly chaotic mess.

Ultimately, The Quartet reminds us to bring passion to who we are and what we do, right here and right now. It reminds us that it's never too late to apologise, to try again, or to take a chance at love. Given the uncertain world that we live in today, it's probably never too early to do so either.

Click here to stand the chance to win two tickets