19 May 2022 | Email | Print |  PDF
Leo Burnett Chicago is the ADC 101st Annual Awards 2022 Agency of the Year, also taking home the coveted Black Cube for Best of Show for The Lost Class on behalf of Change the Ref. Supplied. Leo Burnett Chicago dominated the ADC Awards and ceremony, winning Black Cube and Agency of the Year
The work, done with No. 6 New York and Hungry Man Los Angeles, also picked up Best of Disciplines in Advertising and Interactive, the Members’ Choice award, and the Designism Cube for the entry that best encourages positive societal and political change.

Based on cumulative points for all Cubes and Merits won, the ADC 101st Annual Awards “of the Year” winners are:

Established last year along with The One Show Fusion Pencil, the ADC Fusion Cube is the industry’s first global award to recognise great work that best incorporates underrepresented groups in both the content of the ad and the team that made it.

The New York Times Magazine took home the most ADC Gold Cubes this year, winning nine for eight different entries, including two for The Puzzle of Asian American Identity.

Leo Burnett Chicago was close behind with eight Golds, followed by alma DDB Miami with seven, all working with OMD and Carbo Films for various executions of Pepsi’s Better With Pepsi work.

Area 23 New York picked up five Golds, including two each for The Columbia Journalism Review The Inevitable News and Insmed Incorporated Trapped.

Entries up over last year

Agencies, studios, freelancers, brands and production companies in 36 countries were awarded a total of 95 ADC Gold Cubes, 114 Silvers, 172 Bronze and 381 Merits this year.

#CreativeWeek22: All the Young Ones Student Awards 2022 winners!

In addition to the announcement of this year’s winners, the evening featured a special presentation of the prestigious Manship Medallion, the original ADC competition award created by famed sculptor Paul Manship who made the Prometheus statue in Rockefeller Center, to 12 highly accomplished members of the creative community who have had a great impact on ADC through the years.

The awards ceremony also included a belated celebration of ADC’s historic 100th anniversary, which was postponed last year due to the pandemic and included important members and winners from throughout ADC history. 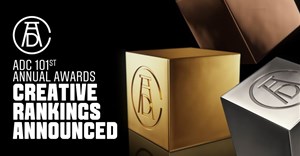