By: Daniel Dercksen
Daniel Dercksen chats with director André Velts ahead of the release of his new film, Vergeet My Nie in local cinemas tomorrow, 14 February.

Vergeet My Nie is based on the true-life story of Mardaleen Coetzer and Hugo Derk who found that love unites despite the difference that separate. What inspired you to bring this story to the big screen?

I can identify 100% with the script. I travelled to the UK (also on a two-year working holiday visa like Hugo and Mardaleen), fell in love and followed my destiny.

Was it a difficult process from page to screen? Tell me about the obstacles?

To recreate the ‘90s in a world that is so modern really kept me awake. You really need to have a budget to control your environment. Technology is everywhere but, in the ‘90s, cellphones were a very rare thing. Also, new buildings, signs and fashion are a big problem. I had to research every aspect of the era to recreate the world.

Were Mardaleen Coetzer and Hugo Derk involved with the film during filming?

They were on set for a day and it was great fun. The actors could chat with them and really share ideas to make the characters real.

Vergeet My Nie shows how important it is to follow your destiny, but also follow your heart? Your views on this.

I agree 100%. To be open to random sequences of events, heart and instinct will always lead to your destiny.

What do you think makes falling in love so complicated?

I think love is an unselfish balancing act. To bring two worlds together and create a ‘perfect falling in love’ world, you need two people on the same wavelength.

You have enjoyed success with other romantic films like Knysna, Die Pro and Jou Romeo. Why do you think romance is so popular with South African audiences?

I think it’s popular all over the world. Love is universal and it gives everybody hope. Sometimes the viewer just wants to relax and escape from real drama.

What do you think makes Vergeet My Nie such a unique romance?

The odds of two people studying in Potch and living in the same house in London years later really opens up the idea of destiny. Do you think that being an accomplished actor is an an important advantage for a director?

I think so. I see a lot of directors that don’t know how to approach actors. I know how it feels in front of the camera.

Music becomes an important supporting character in the the film, underlining the emotional journey, tell me about the choices you have made?

To really provoke joy, love and nostalgic feelings I had to go with the biggest bands of SA in the ‘90s – Just Ginger, Springbok Nude Girls, Boo and Just were very easy choices to make.

How difficult is it to get your film made in South Africa? What are the obstacles and how do think it can be streamlined?

It is very difficult. We need bigger budgets, but we don’t have a film culture. We need to be more responsible as filmmakers, so we cannot spend more money to make a film vs the amount of money that we can make in the box office. People don’t go to the cinema, so it’s a big problem. Standards of filmmaking can only go up if we can explore the process of film-making through the budget because budget = time. 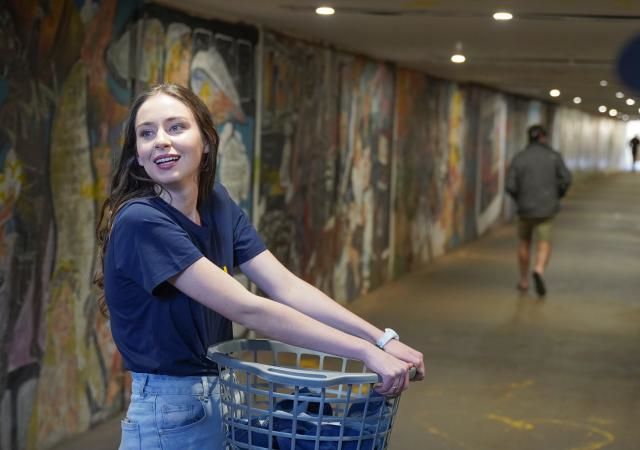 How much has the local industry changed since you started working in the industry?

Streaming services like Netflix, Showmax and Apple TV opened some doors and closed some doors. If you like to make films for the cinema you really need to be more creative.

No! I wanted to be an actor, but I love the psychology behind the process. Directing actors, using camera, colour and location to convey a feeling or expression is the thing that I love most of the process.

What motivates you as a filmmaker?

The opportunity to make the viewer think differently about a subject matter without him or her knowing it was the filmmaker’s objective from the start.

What do you hope audiences will get from watching Vergeet My Nie?

Love will overcome all obstacles.

I’m currently working on a screenplay, but my research takes a lot of time.