Run away with the Cirque du Soleil!

By: Eugene Yiga
What began as a group of 20 Canadian street performers back in 1984 has now grown into a troupe of 1300 artists in 21 different shows around the world. If you'd like to understand why Cirque du Soleil has already entertained more than 100 million people (and will be seen by 15 million more this year), now is your chance.

Dralion is the company's 12th production and has been seen in more than 100 cities around the world since its Montreal debut in 1999. Cirque du Soleil founder Guy Laliberté (recognised by Time Magazine as one of the 100 most influential people in the world in 2004) and director Guy Caron had been meaning to bring together their artistic approach to circus acts with the incredible level of Chinese acrobatic skills.

"This idea generated the concept of Dralion," explained publicist Julie Desmarais. "Fusing the 3000-year-old tradition of Chinese acrobatic arts with the multi-disciplinary approach of Cirque du Soleil, Dralion draws its inspiration from Eastern philosophy and its never-ending quest for harmony between humans and nature. The show's name (pronounced 'Dra-lee-on') is derived from its two emblematic creatures: the dragon symbolising the East and the lion symbolising the West."

Reworking of the artistic and technical aspects After 11 years of its Big Top tour, the creators decided to rework Dralion so that it could be staged in arenas across the world. This required a reworking of the artistic as well as technical aspects. "With more than two years of experience touring in arenas, we can set up as quickly as 14 hours," said production manager Mikey Newnum. "Some venues are a bit more challenging and it can take up to two days or more! In comparison, the Big Top used to take nine days to set up and three days to tear down."

The set contains enough equipment to fill 25 shipping containers (or two-and-a-half 747s) and looks like a Chinese temple from a sci-fi film. Stéphane Roy, who has worked as both a set designer and artistic director in more than 100 productions, had complete freedom its creation. "At Cirque du Soleil, I discovered the blank page," he explained. "I [can] approach each new creation with no preconceptions. No door is closed to the designers and the creative process is free and open." 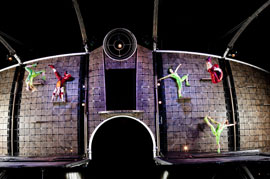 Like all of Cirque du Soleil's shows, Dralion features custom-made costumes and accessories that were created in the Montreal workshops. It took more than three months and 5km of fabric to produce almost 1500 individual costume pieces (which I suppose is modest compared to the 130km of fabric that the company's 400 craftsmen use every year).

Costume designer François Barbeau, who won the 2001 Emmy for Outstanding Costumes for a Variety or Music Program, found his inspiration in China, India, and Africa. As a result, the colours in Dralion are vibrant and bold, with each of the four elements represented in its own shade. (Air is blue, water is green, earth is yellow/brown, and fire is red.) Equally colourful is the detailed make-up that each performer spends about an hour applying before the show.

World-class in every sense And let's not forget about the performers! With 50 artists from 16 countries, Dralion's talent is world-class in every sense of the term. The show also includes six musicians and two singers performing composer and musical director Violaine Corradi's lively score, which draws its inspiration from classic Indian melodies as well as motifs from Andalusia, Africa, and beyond. "When I write the musical score," she said, "I first develop the themes that the characters inspire in me, because everything flows from them."

It's hard to single out which of the dozen acts I liked most given that each one highlights a different aspect of Cirque du Soleil's craft, from acrobatics and acting to dexterity and dance. What I found most impressive was the realisation that such a diverse group of people were able to come together in such a beautiful way. "Language is not a barrier for me," Chinese performer Kong Yufei explained in an interview before the show. "Body language works most of the time and when we get closer it gets easier to communicate and understand each other." Travelling around the world also helps the performers relate to new people. "It's magical and very intense in terms of learning, sharing and experiencing different cultures and lifestyles every week," Brazilian drummer Alex Reis added. Zhang Jianan agreed: "It's very exciting especially when there are cultural differences and traditions," he said. "I don't remember every city I have performed in because there are too many. But I remember the audience reaction."

Speaking of which, the audience reaction was expectedly positive throughout (although my friend was a little disappointed to discover the truth about a certain "character"). It's not so much that the story itself was engaging; if anything, it gets a bit confusing to keep up with universal gods, crazy Italian clowns, a chosen child with special powers, and a wheel of infinite time. But the moment you stop thinking (something I'm told I do too much of anyway), you begin to experience something profound.

Cirque du Soleil's mission is to invoke the imagination, provoke the senses, and evoke the emotions of people around the world. Shows like Dralion use broad themes so that each member of the audience finds their own meaning (no matter where in the world they're from) but still comes away with the same joy as everyone else. It's the kind of experience that stays with you long after the show ends, perhaps even for a lifetime. What more could you want?

Cirque du Soleil's Dralion is at Cape Town's GrandWest Casino until 17 March and at Joburg's Coca-Cola Dome from 21 March. Tickets are available from Computicket. For more information, go to www.cirquedusoleil.com. The magnetism of Cirque du Soleil's Dralion is inescapable8 Mar 2013