Still Waiting For The Barbarians

By: Eugene Yiga
JM Coetzee, winner of the Nobel Prize for Literature in 2003, has authored 13 works of fiction. A favourite ever since its publication in 1980 is Waiting For The Barbarians, a new adaptation of which is now showing at the Baxter Theatre in Cape Town. 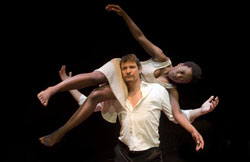 Russian director Alexandre Marine first read the book 10 years ago. "I was possessed by the idea of doing something with it in theatre," he said in an interview with the Cape Times. "In writing the stage version, I was trying to keep the spirit of the book as it is, but I couldn't stick to it exactly. I had to change some development and characters for the play to be understandable. But I have kept the allegory, the symbolic nature of the work."

Indeed, Waiting For The Barbarians, a novel Marine describes as "poetic and philosophical", is a powerful metaphor and one that still applies to our modern world. (American composer Philip Glass saw parallels between his 2005 opera adaptation and the invasion of Iraq.) It's set in a small frontier town in a place known only as "The Empire". In it we meet a magistrate (Grant Swanby), happily living his life. But all that changes when a state of emergency is declared by The Empire's special forces, led by the malicious Colonel Joll (Nicholas Pauling).

Why the fuss? Well, it turns out that the barbarians (natives "recognised only by their ugliness") are planning an attack. So Joll and his men decide to attack first. They capture some barbarians and bring them back to be tortured and killed in what later becomes a public spectacle. And while few people question these tactics, the magistrate begins to struggle with the idea. He takes in a barbarian girl (Chuma Sopotela), crippled and blinded by the torture, and nurses her back to health while trying to keep his increasingly intimate feelings for her under control. It is, as a New York Times review of the book wrote, "an improvised ritual of domineering guilt, the confused gesture of a confused man".

There's a lot more after that. While the special forces pre-emptively hunt the barbarians like a mirage in the desert, the townspeople are taken over by fear and grow increasingly barbaric themselves. ("It is a paradox, but throughout the course of known history, civilisation has always been more aggressive, more warring, and bloodier than non-civilisation," Marine points out.) In the end, as was the case in the haunting poem that inspired Coetzee, the barbarians never come. Perhaps they didn't even exist. Or perhaps they were there all along.

Many elements of Maurice Podbrey's production work really well. The cast (which also features Ruben Engel, Owen Manamela-Mogale, Chi Mhende, Alistair Moulton Black, and Anele Situlweni) is consistently strong, especially in the beautifully choreographed dream/dance sequences. Yes, there were a few scenes that bordered on operatic, but the rest were tightly controlled.

Another element that I liked was Craig Leo's set design, which gets the most it can from an unfortunately small space. This, together with lighting by the director and a beautiful (although sometimes louder than the actors) score by Dmitri Marine, sets the tone quite well.

The only thing I didn't really understand was the humour, which felt awkward when it was intended and really awkward when it was not. Were we supposed to laugh as one soldier happily shined his boss's shoes or during the explicit sex scenes? If so, why? And if not, why did we? Perhaps these were the play's attempts to add some levity to all the gravity. Or perhaps the only way to break the overwhelming tension was through uncomfortable laughs.

Ultimately, this bold and provocative adaptation of Waiting For The Barbarians may not be to everyone's taste. But it will certainly make you feel something, whether you like that feeling or not.

Waiting For The Barbarians is showing at the Baxter Theatre in Cape Town until 1 September 2012. Tickets are available from Computicket. This show is not suitable for children under 16.
NextOptions
›
Email Print PDF
Follow