The long walk to Boesman and Lena

By: Eugene Yiga
"I am truly very thrilled," said literary icon Athol Fugard at the news that Boesman and Lena would be staged at the Baxter Theatre in Cape Town for the first time. If you'd like to understand why he was so excited, you have to see the play and discover for yourself.

Fugard, who Time Magazine called the greatest active playwright in the English-speaking world, got the inspiration for Boesman and Lena in 1965. While driving down a rural road in the Eastern Cape, he came across an old woman walking in the sun. He offered her a lift and, overcome with gratitude, she burst into tears. It turns out that she was on her way to another farm, kicked out of the previous one because her husband had just died. And yet, despite her pain, she was keeping strong. That's what struck Fugard the most. 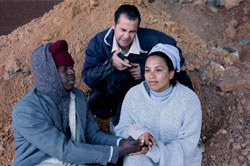 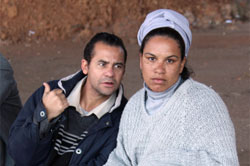 The play is set in the Swartkops mudflats outside Port Elizabeth. Boesman (Elton Landrew) and Lena (Quanita Adams), a once stable and happy couple, are now homeless. To make matters worse, their relationship is one of physical and emotional abuse on both sides. And even though they want to, neither of them is able to let go. It seems that apart from a few possessions they carry on their backs, each is all the other one has.

But that changes with the arrival of another vagrant (Charly Azade). Lena calls him Outa (we never learn his real name), loves him almost like a pet, and can't stop sharing her life (even though he only speaks French and doesn't understand a word that she says). Boesman isn't quite as kind. He senses trouble, treats Outa with the same hatred that other people have shown to him, and doesn't realise that this newcomer will change them both in ways that neither expects.

There are a lot of things to like about director James Ngcobo's revival, which comes a generation after the play was last staged. ("There is no sell-by date on good theatre," he said.) But it mostly comes down to three strong performers. Some might argue that they could have been a bit older (or at least have come on stage with faces that weren't so clean), but they really bring passion to their roles.

Special mention has to go to Adams (winner of three prestigious Fleur de Cap Awards). Her Lena steals the show. "I feel like the words, the physicality of it all, sit in me in a way that makes the character feel familiar," she said in an interview with the Cape Times. "Never mind Lady Macbeth; Lena is a force!" So much so, in fact, that her performance practically overwhelms the other two.

One unfortunate effect of playing someone so unstable is that Lena's characterisation sometimes borders on caricature. She gets a lot of laughs for her funny remarks, which Adams delivers in a perfect accent. But were we laughing with Lena or at her? I'm not sure. I also got the impression that the actors weren't expecting this response, which is why they sometimes delivered inaudible lines because they didn't wait for the laughter to die down first.

Applied to contexts around the world

So, how relevant is Boesman and Lena over 40 years after it was first staged? Quite a lot. Many of the problems the play brings up (homelessness, racism, etc) are still very serious today. And, more than being timeless, Boesman and Lena is the kind of play that can be, and has been, applied to contexts around the world. (There have already been two film adaptations, the second of which starred Danny Glover and Angela Basset as the leads.)

But the play demands that we connect with and relate to, people we don't know and might not even want to. Think about it: How much can we really understand an experience we've never had and pray we never will? Some people might come to the performance with emotional barriers in place, afraid to get too close in case the discomfort gets too much. All that does is leave us feeling sympathy but not empathy, being moved but not being changed.

Perhaps I'm demanding more from a theatrical experience than is expected or even required. And perhaps it's enough simply to feel something, even though that feeling might not last or inspire you to help someone in need. At the very least, it's good to be reminded that there are other worlds besides our own. Let's hope that we don't have to wait too long before we get another reminder as powerful as this.