The Champ is here

By: Eugene Yiga
It's hard to find a good job these days. I guess that's why more and more people are taking whatever they can find. And while some of these temporary gigs might not be so bad, others are a living nightmare.

Champ tells the story of three down-on-their-luck actors (Darron Araujo, Mark Elderkin, and Nicholas Pauling) forced to work as giant teddy bears at a shopping mall over the holiday season. But even though their job involves acting happy on the outside, these guys are pretty miserable. (If your employment facilities were as dingy as Julia Anastasopoulos' brilliantly designed set, you'd probably be on the verge of a breakdown too.)

To make matters worse, they have to battle with a mischievous brat who has a propensity for nasty pranks involving shin kicks and smelly pee. Can they hang on for a few more days so they can get paid and get out? Or should they fight fire with fire, consequences be damned? 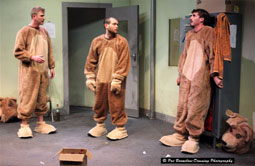 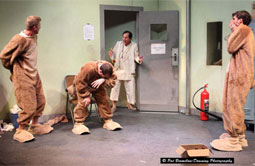 A funny and fast-paced script

Writer Louis Viljoen has created a funny and fast-paced script. Yes, some of the humour comes from inside jokes that seem to be private nudges and winks for the Cape Town theatre crowd. And yes, director Greg Karvellas occasionally lets the antics border on slapstick and unhinged. But Champ still gets loud laughs right from the start and (almost) all the way to the end.

"Look, you've got to make it fun otherwise what the hell are you doing?" Viljoen asked in an interview with Carla Lever. "If anyone ever tells you that making plays is hard work then they're lying. Construction work is hard work. Brain surgery is hard work. If you do a play, it's got to be fun work or it's not worth it."

One aspect I struggled with a bit was the excessive swearing. This wasn't a problem initially, because it worked pretty well at emphasising the frustration in an amusing way. But then, as every imaginable four-letter curse was crammed into the 70-minute show, I got the impression that it was just for the sake of being "edgy" and increasingly less indicative of how people actually talk. In fact, I believe that taking out some of the more adolescent vulgarity (which turned many an open laugh into many an uncomfortable cringe) would still leave more than enough adult intelligence in the rest of the script.

Nevertheless, Champ is worth seeing for the strong performances from the three leads. (The play also features Adam Neil, kooky in Crocs, and Kerstin Francis, eerily calm compared to the rest.) Their characters are different, but each seems filled with the same stifled ambition, so much so that you actually feel sorry for their plight. I guess it's a good thing these guys are so talented in real life. I'd hate to see them working as teddy bears any time soon.

Champ (PG-18), the second of four plays in the Spring Drama Season, is showing at the Artscape Theatre in Cape Town until 20 October. Tickets are available from Computicket. Special discounts are available for students and groups of 10 or more. Additional offers are available via Artscape box office on +27 (0)21 421 7695. 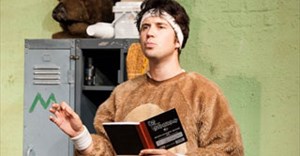