By: Eugene Yiga
Inspiration can strike at any moment. For Robert Fridjhon, whose award-winning stage career spans over twenty years, it came when he worked for FreeMe Wildlife Rehabilitation Centre back in 2006. Given that most of the cases he worked on involved birds, and that he was reading African Genesis by Robert Audrey, it was only a matter of time before the idea for Twitch was born. 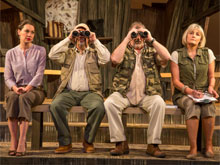 "I was whiling away a blissful, bushveld afternoon in Eugene Marais' beloved Waterberg region, reading an article written by Kenneth Newman for some wildlife magazine or other," Fridjhon said. "Much to my surprise, he went on at length describing his disdain for fanatical birders and twitchers; the type who will shove small children out of the way in order to get a glimpse of some rare species, the type who will stop at nothing (including other wildlife) to enter a new sighting in their bird guide, the type who have become known as the bushveld paparazzi." 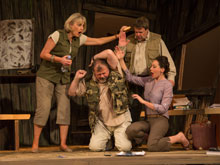 And so we have the story of two couples - a mining engineer (Michael Richard) married to a housewife (Louise Saint-Claire) and a paleoanthropologist (Russell Savadier) married to a marketing executive (Bronwyn Gottwald) - taking part in a birding competition in the Kruger National Park. Things start well enough but spiral out of control as it becomes clear that there are far more interesting things to discover inside the bird hide than there are out in the bush.

Besides the comedy and that this is a KickstArt production - Cabaret, Don't Dress for Dinner, and countless other hits - Fridjhon's script takes a closer look at issues like parenting, religion, philosophy, and more. "How much have we really evolved since our primordial beginnings, and how far removed have we become from our natural origins?" he asked. "Is society the work of man, or is man the work of society? It's an anthropological paradox." More than that, it's all quite intriguing and makes me eager to see what he'll hatch up next.

Twitch (PG-16) is at Cape Town's Theatre on the Bay until 1 June and at Pieter Torien's Montecasino Theatre and Studio from 12 June. Tickets are available from Computicket. As a passionate conservationist, Robert is pledging a percentage of his royalty fee to FreeMe Wildlife Rehablitation Centre. If you'd like to help, go to www.freemewildlife.org.za.