Michael Jackson lives on in HIStory!

By: Eugene Yiga
"Music has been my outlet, my gift to all the lovers in this world," Michael Jackson once said. "Through it, my music, I know I will live forever." Well, based on Kenny Wizz's spectacular performance in HIStory II, the king of pop won't be going out of our lives any time soon. 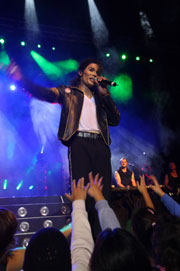 HIStory II, which received rave reviews for its recent performances in New Zealand, is a biography of Jackson's life. It features more than 20 of his songs (some dating back to the Jackson 5), including Wanna Be Startin' Something, Billie Jean, The Way You Make Me Feel, Man In The Mirror, Smooth Criminal, Black Or White, Earth Song, and several more. Better still, they're all performed by a live band led by musical director Richie Baker and his impressive solos on lead guitar.

Granted, there were some problems with the sound in the first half, which made it hard to hear the vocals over the rest of the instrumentation and left Wizz constantly adjusting the microphone. But the second half was a lot more cohesive and got the house on its feet with hits like Beat It, Bad, and the thrilling encore that raised the roof (um, so to speak). Fan or not, it's hard to deny the unparalleled impact that Jackson's music has had on popular culture (he's sold over a billion units worldwide) and explains why so many people cheered instantly at the start of so many songs.

Directed by John van Grinsven and produced by Showtime Management Australia (the company behind the popular Beatlemania and Queen: It's a Kinda Magic tribute shows), HIStory II also features half a dozen dancers in a range of costumes from the 1960s, 1980s, and beyond. The visual effects were equally dazzling (read: somewhat blinding for the first several rows), so much so that you can only appreciate the high production values once you've seen the show for yourself. 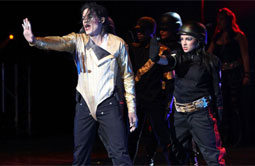 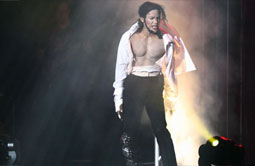 Front and centre of it all is the unbelievably talented Kenny Wizz. He was only 20 when Michael Jackson released "Thriller" and, after many people noticed the uncanny resemblance that the two shared, began performing at shows in California. From there, it was on to Atlantic City, as well as tours through Europe and Asia, before he settled in Las Vegas to perform the Splash tribute show at the Riviera Hotel and Casino.

But when Michael Jackson died unexpectedly in 2009, Wizz closed it down. "In my mind, I surely thought that I would never be capable of ever performing again and that the best thing to do to honour Mr. Jackson was to retire my tribute performances," he said. The fans begged him to continue and, when he eventually did so, Wizz noticed that Jackson's death had made them even more critical of his performances. "It's more difficult because my act is observed through a microscope now he's gone," he said. "People want the closest thing possible."

Clap, sing, and even dance along

Well, after more than two decades perfecting his act, Wizz certainly doesn't disappoint. Yes, there were a few misplaced oldies in the audience, so quiet and glum in their seats that you wonder why they were even there, but everyone else couldn't help but clap, sing, and even dance along. Wizz has such amazing stage presence that it's hard not to be blown away when he brings on the moves, especially the famous moonwalk. It's also quite impressive to see him maintain such high energy levels from start to end (and change costumes faster than anything I've ever seen).

Wizz is widely recognised as the best Michael Jackson impersonator in the world, but calling him that doesn't do justice to HIStory II. This is the real deal! (My brother had more fun at one of Wizz's previous shows than he did when he saw the actual Michael Jackson perform live in New York.) Really, if there was ever a time to get your butt to the theatre, this is it!

The Michael Jackson HIStory ll Show runs at the Artscape Theatre in Cape Town until 28 October, The Sibiya Theatre in Durban from 6 December to 6 January, and The Joburg Theatre from 17 January to 10 February. Tickets are available from Computicket.