5 Jun 2012 | Email | Print |   PDF
By: Helen Dodson
A Yale University-led research team has developed a way to measure the loss of insulin-producing islet cells in the human pancreas. The death of those beta cells leads to diabetes. The finding is a crucial step in developing therapies to preserve insulin production and slow or halt the progress of diabetes. The study appears in the June issue of the Journal of Nuclear Medicine. 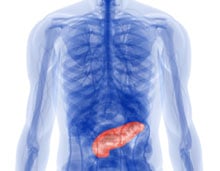 Until now there has been no effective method for imaging pancreatic islet beta-cell mass in a non-invasive manner. Based on the work of Paul Harris and colleagues at Columbia University, the Yale team focused on the genetically expressed protein known as vesicular monoamine transporter type 2 (VMAT2). This protein facilitates the storage and release of some neurotransmitters, and is expressed simultaneously with insulin in pancreatic beta cells.

The Yale team infused both healthy patients and those with type-1 diabetes with a radioactive tracer that targets VMAT2. Patients were then scanned with a PET camera to calculate the radioactivity concentration in the pancreatic cells and measure the binding of the tracer.

Adjusting for dosage and body weight, the radiotracer binding among pancreatic cells was 40 percent less in type-1 diabetes patients than in healthy patients.

Senior author Gary W. Cline, associate professor of endocrinology at Yale School of Medicine, explained, "This tells us that we can now measure the loss of the pancreatic islet cells that produce insulin in diabetic patients. Being able to make these measurements will help in the development of a drug that can stop or slow the death of these cells, and thus prevent the damaging effects of type 1 diabetes."

This study was funded by the Yale-Pfizer Bioimaging Research Alliance, grants from the National Institutes of Health, the Yale Clinical and Translational Science Award from the NIH, and a Distinguished Clinical Scientist Award from the American Diabetes Association.