14 Apr 2018 | Email | Print |   PDF
Issued by: Burger King
What do a Tyrannosaurs, Stegosaurus, Gallimimus and Ceratosaurus have in common? 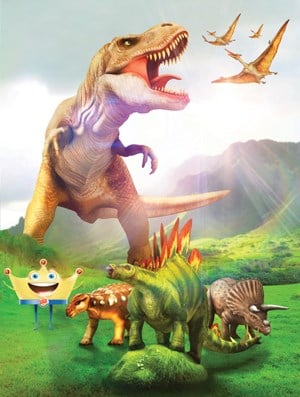 They all feature on the new BK® Dino Cards which will launch at BURGER KING® South Africa on 3 April 2018. Not only will those hungry tummies be satisfied with a BK JR™ Meal, but those insatiably, curious minds will also get a serious side order of information.

The 25 new BK® Dino Cards will come to life through the free to download app that has been developed for Android or iOS smartphone or tablet. Through the app, the dinosaur is unlocked, and a 3D animated model of each dinosaur is added into the user’s real-world surroundings.

Not only are the dinosaurs animated, but users can also use the application to hear what they would have sounded like, how to pronounce their names and to learn more about each dinosaur in the extra fun facts section.

Says Ezelna Jones, marketing executive at BURGER KING® South Africa, “At BURGER KING®, we know that kids learn and grow through imagination and seek pleasure in everything they do. With our new kids’ toy, kids can enter a digital dinosaur world at a BURGER KING® restaurant and experience a live view of the majestic creatures. We’re embracing the need for change and adapting our offering to meet the needs of these inquisitive minds.”

With the new BK® Dino Cards, BURGER KING® is unleashing a dinosaur world that kids can explore through AR technology.

Anthony Eva from bizAR Reality explains the technology used to create the cards, “The Burger King® application utilises state of the art technology such as AR. This technology superimposes digital graphics on top of the real-world, adding 3D animations and information on top of a person’s physical reality. By merging the digital and physical world of today, AR is able to add a new dimension of excitement to the idea of traditional collectibles and toys. Ultimately, it provides an engaging gateway for children to access information in an even more memorable way.

“This was definitely a partnership that aimed to surprise and delight the children of today, by creating both an educational and enriching experience. At its core, the application was designed to introduce both children and adults to a more interactive and immersive way of learning, by inspiring imaginations and creating memorable family moments.”

Welcome to BURGER KING® South Africa, the HOME OF THE WHOPPER®.