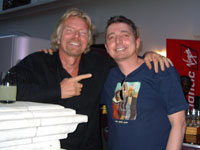 To calls of "bravo", "well done", from assembled media, and Branson himself, Net#work's Mike Schalit, unveiled the new campaign, which is based on the insight that with most other business class products, passengers are so close together that they end up sleeping virtually on top of a complete stranger.

Enter Bob Dooley, the name given to the advert, although it should be called Bob 'Drooly'. O'l Bob, who is the personification of the person you DON'T want to sit next to, is quite happily invading his co-passengers space, snuggled up, head on his shoulder, fast asleep and drooling down his shirt.

The invasive, close proximity of 'Bob' sparks a dream, or nightmare depending on which way you look at it, in the protagonist. The ad shows romantic scenes of an idealised courtship between the two men. Running through the waves, picnicking in a meadow, flirting in front of a log fire, and finally getting married. The dreamer wakes up and there is Bob... The commercial aptly illustrates the voice over - "If you wanted to sleep with him - you would have married him - rather fly Virgin Atlantic Upper Class and get your own suite". 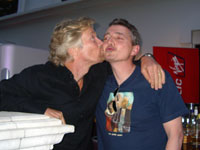 The ad creators from Net#work BBDO held their breathe waiting for the response from the Virgin Empire Boss. Branson laughed all the way through it and shouted: "Run it again". He then wanted to know if the ad would work for the UK market. Branson later showed his appreciation by giving Mike Schalit, Net#work's Chief Creative Officer, a big smooch.

Asked how they came up with this idea, Net#work Creative team, Phil Ireland and John Davenport said: "Our brief was to illustrate that Virgin has the best business class product in the sky. The human truth is everyone dreads sitting next to someone like Bob Dooley, who spills over into our already cramped seat. We decided to use this worse scenario to create an opposition effect to Virgin's new seats."

Says Virgin Atlantic Country Manager, Mike Higgins: "This new commercial is an irreverent view of how many airlines treat their business class passengers - piling them on top of one another. We decided to poke a bit of fun at the situation and at the same time focus on exactly how much space is available for Virgin Atlantic passengers. We are extremely proud of the new cabin and delighted it is now on our South African route."

And in the words of the indomitable John Farquhar, Editor of Advantage: "I know good when I see it, and this is bloody good!"
NextOptions
›
Email Print PDF