21 May 2021 | Email | Print |  PDF
By: Amy Pieterse, Issued by: Ginkgo Agency
This International Day for Biological Diversity, we need to recognise ourselves as a part of the planet's story. Harnessing the power of positive storytelling, we are bridging the gap between us and the natural world to better preserve it. One million species are at current risk of extinction. Animal populations have decreased by 68% in the space of 50 years. As we continue to destroy natural habitats for our own needs, we are wrecking our chances of survival. We depend on biodiversity to sustain the Earth and ourselves. But we’ve become myopic in our way of life, detached from the reality of what is happening to our planet. There may be headlines about the loss of rhinos and tigers, but it’s the insects and plants we cannot see that are also disappearing, signalling impending environmental disintegration. The collapse of biodiversity is happening while we stare at our screens. It may seem like there is little to be done from here. Yet, it’s precisely in this digital space that we have an opportunity to close the gap between humanity and nature.

Knowledge is more accessible than ever before. But the role the media plays in disseminating information is crucial. Currently, conservation media is relegated to two disparate streams – alarmist reporting that only serves to desensitise and immobilise audiences or visually stunning nature documentaries that sidestep human impact. This messaging doesn’t work. We need to see ourselves as part of the story of our planet. In order for people to take an active interest in preserving biodiversity, they need to feel that they have a role to play. How we frame the natural world can be the difference between someone scrolling on or changing their perspective.

Know your 'why'. It's how we build communities

A new story for our planet

Constructive journalism isn’t an idealistic exercise. Studies show that solutions-based stories that engender positive emotions encourage people to take action and become more environmentally responsible. And the good news is out there, we just don’t often see it. In our storytelling, there

needs to be a balance between an endearing narrative and an impetus to action. But this is possible – and it can be accomplished in 60 seconds.

Beautiful News was founded with the purpose to share one-minute films of everyday people creating positive change in South Africa. We’ve since expanded worldwide, but have sharpened our focus on the natural world. Harnessing the power of constructive narrative, we are reconnecting people to the story of our planet. To date, we’ve released nearly 100 micro-documentaries on social media about differing species, from hadedas and Cape cobras to Eurasian lynxes. Within a single minute, we focus on the species’ characteristics, their role in the ecosystem, the threats they face – and what people can do about it. We’re exploring every aspect of this biodiverse world, endearing people to the creatures we coexist with.

These short videos have the ability to interrupt mindless scrolling to inform and inspire people. While leafcutter ants and lesser famingos may be worlds away, that doesn’t mean we can’t still empathise with them. By collaborating with creatives worldwide, we have created stories that are educational, arresting and,most importantly, accessible. This is the natural world at our fingertips, neither stuck behind a paywall nor bogged down in scientific jargon.

The end of disconnection

Beautiful News not only focuses on a specific animal, but also the conservationists, organisations and everyday individuals who play their part in preserving biodiversity. Our human role is emphasised in each story, whether focusing on a law that was changed to protect a species or the animal rescuer caring for urban squirrels.

By recognising ourselves in conservation, we may be more compelled to petition our governments for change or simply stop by the side of the road for an injured animal. Sharing a flm on Facebook or Instagram reorients our focus and values back to the natural world. A positive story has the power to do more than brighten someone’s day. It can show us what is possible. Learning about the return of eastern quolls to mainland Australia or rewilding efforts in Argentina demonstrates that change is happening and change is in our hands.

This is biodiversity journalism in action. There is no understanding of the natural world if we do not reinforce the interconnected relationship between people and nature. For people to take a vested interest in conservation, we need to see ourselves in the creatures we may never even encounter. A single story won’t be enough to save a species. But recognising ourselves as a part of this delicate web of diversity can decide whether or not we take an active role in our survival. Pessimism can’t be our de facto narrative. Hope is the story we need to choose.

We are in the trenches together – and it’s through the wilful efforts of the conservationists, the storytellers and the homebodies scrolling online that we can protect the thousands of species we live with. There is a whole world out there. We can see it. We can value it. We can preserve it.

We are a strategic content format agency driven to create communication solutions for those who require a compelling voice within the global landscape.
About Us | News | Contact
Read more: Beautiful News, Amy Pieterse 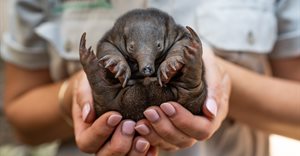 Ginkgo AgencyKnow your 'why'. It's how we build communities19 Mar 2021 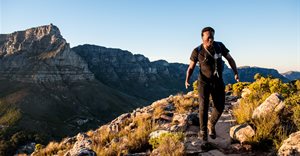 Ginkgo AgencyGrit, resilience, and the creativity to overcome adversity29 Jan 2021 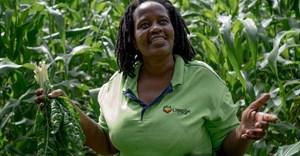 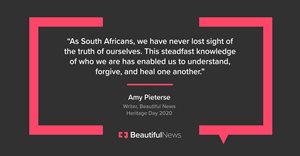 Ginkgo AgencySouth Africa's legacy is our spirit of resilience23 Sep 2020 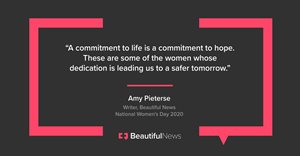 Ginkgo AgencyHope is an action. These are the women leading us forward7 Aug 2020