By: Eugene Yiga
Chinese philosopher Wu-men once said that if your mind isn't clouded by unnecessary things, then this is the happiest season of your life. I couldn't agree more.

You see, I'm notoriously bad when it comes to making choices, especially when those choices are about food. It's the reason I often have second thoughts and a little food envy at a restaurant when other people inevitably pick something I end up wanting too.

It's also the reason I was excited to try Headquarters (mostly referred to as HQ). Opened in Cape Town in December 2008 and Johannesburg in February 2011, this trendy restaurant is loosely based on the famous Le Relais de L'Entrecote, a Parisian restaurant that pays homage to meat. Basically, there's only one option on the menu: salad, sirloin and chips. (Actually, they also serve grilled Portobello mushrooms, stuffed with mushroom duxelle and topped with parmesan gratin and their signature Café de Paris butter, but who goes to a steakhouse to eat vegetarian food?)

The salad (topped with toasted pine nuts, parmesan shavings, and a mustard vinaigrette dressing) was quite good. The 250g free-range sirloin (served with double fried chips and the signature Café de Paris butter, which can be topped up as much as you like) was even better.

The service was unbelievably quick, partly because the waiter doesn't have to ask you anything other than how you like your steak done, but also because our reservation was at a time when the place was still quite empty. Eating an early dinner also meant that we could sit back, relax, and enjoy the sophisticated but inviting atmosphere. Alas, it all changed when a group of 13 drunken guys decided to enjoy some fine dining on what must have been a bachelor party. (Why else would one of them be wearing overalls and carrying kettle bells?) So we moved downstairs, much like the couple sitting next to us had just done.

For a while things were considerably better, especially because we got to enjoy some serenading sounds from a live performer brilliantly channelling Michael Bublé. But then one of the party animals decided to join the singer on stage for a duet of Mr Bojangles. Thank goodness the karaoke machine experienced technical difficulties after that song; it's awkward enough watching Idols at home.

Anyway, the boys upstairs began to behave once their food arrived, much like young children do when they've been fed. But by now the restaurant had become quite busy, which is probably why our dessert took longer than the main course. Perhaps that's also why the waiter neglected to mention that the chocolate fondant was served in a piping hot bowl that would burn your fingers when you inevitably had to touch it. Despite the fact that having one option should create economies of scale, our night at HQ wasn't cheap. The bill for two meals, a shared dessert, a bottle of water, and a bottle of wine came to around R600. Fortunately, we had an Entertainer Cape Town voucher, which shaved R175 off the total by making one of the meals free.

Still, despite the rowdy revellers who make me hope HQ looks into the idea that "right of admission is reserved", we had a wonderful time. Everyday life presents us with way too many decisions. Eating at HQ is a no-brainer. 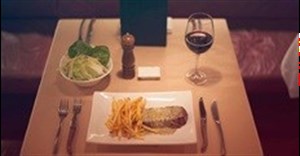