Made up of select members of the South African creative community, the Creative Circle aims to develop and improve the standard of the South African advertising industry's creative product, and to enhance its reputation as one of the country's world-class industries. These awards and rankings are based on Creative Circle points accumulated from all endorsed local and international award shows.

This is the third consecutive year that O&M Cape Town has been the leading agency in the individual rankings; "Topping the table again is something we didn't expect," commented Luca Gallarelli, Managing Director of O&M Cape Town. "We put a great deal of pressure on ourselves to do well and we're delighted that this significant and sustained effort from all in our agency has paid off."

"We're very excited to have achieved the number two spot," added Alistair Mokoena, Managing Director of O&M Johannesburg. "The results are testament to our clients and our people who have worked extremely hard to come back from a tough year and we will again aim to remain ranked amongst our fellow winners."

In the campaign awards, O&M Cape Town walked away with first place in the Print category for the Golf R campaign, as well as third places in the Experiential category for the Polo Tag campaign and the Rapewise campaign in the Radio category. O&M Johannesburg scooped two first places in Radio and Film, for Lucozade and Topsy respectively, as well as an additional third place for the Bose Noise Cancelling Headphones campaign.

These achievements also come soon after the group's outstanding performance at IAB's Bookmarks Awards last month, where O&M SA was the most awarded agency, taking home 16 trophies for digital work across a number of categories, and with Gloo Digital Design being named Agency of the Year - proof that O&M SA is leading across multiple disciplines.

"Ad of the Year has always been tough to win; there can only be one winner in each category and Ogilvy won three last night," said Chris Gotz, Co-Chief Creative Officer of O&M South Africa. "It's unprecedented and a huge testament to the great creative, innovative and effective work that is coming out across group." 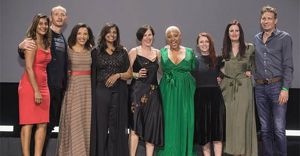