A rollicking Raiders of the Lost Aardvark

By: Michael Britton
During World War 2, an intrepid, almost blind airplane mechanic with a heart murmur so loud you can hear it across the street, flies a cranky biplane from Cape Town to Cairo. The original mission - to deliver documents to Walvis Bay - becomes a madcap adventure as our unlikely hero, Salty Hepburn, pursues a suspicious tramp steamer and double agents across Africa. En route he encounters flamingos, mielie fields, gorillas and a wicked German baron. 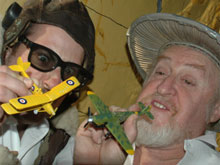 The pace veers between rollicking and frenetic as the father-and-son team of Nicholas and Luke Ellenbogen rush around the stage in this hilarious enactment of a fictitious journey. Luke Ellenbogen plays the role of Salty Hepburn, while Nicholas fills every other role - from British officer to gorilla, from evil German baron to Marie, an ex-girlfriend of our hero.

Visual gags, inventive use of an unlikely range of props and clever wordplay (watch out for wild beasts and underwear) keep the audience laughing from start to finish. Not surprising then that Raiders of the Lost Aardvark won a top award at the 2010 National Arts Festival.

Giggles and grins throughout

This was never meant to be intellectually challenging theatre, and it is a lot of fun - not least of all for the actors who are never still or silent as they giggle and grin their way through the show. Members of the audience are called on at various stages to fill roles as swing doors or stable doors, porters, or, in one case, the back end of a camel.

Raiders celebrates 21 years of production this year; a notable achievement. The original script, written by Nicholas Ellenbogen and Ellis Pearson, has been adapted by the actors, Nicholas and Luke Ellenbogen, and director Christopher Weare. Not having seen the original, it is difficult to know how much it has been adapted, but the show is peppered with asides and chirps, which may or may not be ad lib. Whatever.
It remains a fast-paced show guaranteed to lift your spirits.