By: Eugene Yiga
Following its sold-out debut in Johannesburg and Cape Town last year, Cirque de la Symphonie returns to South Africa with performances in Cape Town this weekend and Johannesburg next week.

Cape Town concerts will be accompanied by the Cape Philharmonic Orchestra, conducted by the esteemed Theodore Kuchar. The orchestra celebrates its 100th anniversary this year and, judging by last year's performances, the collaboration with Cirque de la Symphoine is likely to be another highlight of an already impressive calendar.

As was the case for the sold-out concert in Durban last weekend, performances in Johannesburg will be accompanied by the Kwazulu-Natal Philharmonic Orchestra. The orchestra celebrated its 30th anniversary last year by hosting the African debut of Amsterdam's 125-year-old Royal Concertgebouw, hailed as the greatest orchestra in the world by critics at Gramophone Magazine. The brainchild of Russian aerial artist Alezander Streltzov, Cirque de la Symphonie began almost a decade ago. Its aim was always to enhance the music and bring new audiences. "Our show is not about smoke and lights," Streltzov says. "It's about artistry and excellent music and this has proved to be a phenomenal fusion."

Orchestration is perfectly chosen to match the range of choreographed performances: last year's highlights included extracts from Rimsky Korsakov's Capriccio Espagnol (for the Tango Duo), Wagner's Ride of the Valkyries (for the Aerial Rope), Khachaturian's Sabre Dance (for the Electric Juggler), and extracts from Stravinsky's Firebird (for the Russian strongmen). Of course, as great as the international performers were, the concept wouldn't have worked without live music from the orchestra, still on top form despite just ending a month of several intense performances at the time. That's why my only frustration is that the audience seemed more interested in the visuals (read: applauded every few minutes) instead of letting the music play.

One can only hope that people in the sold-out theatre (especially those witnessing a live symphony for the first time) went home with the intention to explore some of the music they'd just heard. More than that, I sincerely hope more of us will attend future performances of symphonies sans cirque. Our country's top musicians already create magic every day.

Cirque de la Symphonie takes at Cape Town's Grand Arena on 21 and 22 June, and The Joburg Theatre from 27 to 29 June. Book at Computicket and www.joburgtheatre.com. 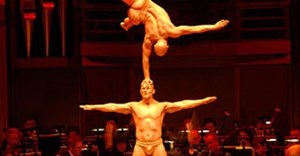