3 of the best hotel buffet breakfasts in Cape Town

By: Shellee-Kim Gold
Some like it hot. Some like it cold. While others like it delicate with an emphasis on caffeine. From genteel buffets to banquets fit for royalty, find everything you'll ever want at the best local hotel buffet breakfasts.

Around The World In 80 Days by Jules Verne is a classic adventure novel. ‘Around The Culinary World In 180 Dishes’ best describes the Table Bay hotel’s banquet of a breakfast.

Guests from every continent can obtain something familiar to them at this Waterfront hotel: for the Chinese, there’s a soupy rice porridge topped with chillies and garlic, sushi for the Japanese, pain au chocolat, cold cuts and cheeses for the continental-loving Europeans, hot English breakfast items, waffles with maple syrup and cream for Americans, a variety of fish for pescatarians and Vacon at the vegan station, amongst others. Assorted vegan cheeses include Camembert and chevin – both better than their dairy counterparts in every way. But my breakfast favourite turned out to be Chef Keshan’s beetroot-seitan (gluten) pink ‘roast beef’ slices.

Of the 850 meals he prepares daily, he’s had some unusual requests. “I’ve even had Jain religious members request root-free breakfasts. Consuming foods grown underground interferes with their practices."

But for someone who can quickly serve up ostrich or a beef fillet for die-hard carnivores for breakfast, this is no big deal. Though hot meat dishes proliferate on the buffet. Even the standard offering of cereals, yoghurts and fruits are extensive.

Every melon type you can think of, yoghurts of all descriptions and several berry compotes, amongst them – which you can sample solo or eat with one of the many cereals, muesli or oats. I tried some of the exotic pickled jackfruit, popular in Asia – which Keshan said was currently trending.

Wash it all down with something from the freshly-squeezed fruit and vegetable juice station. An array of colourful jugs included my favourites: carrot, beetroot and cranberry.

Cheeky restaurant starlings make the ceiling ledges their home for the easy table pickings. They seemed to sing and swoop in time to the music, almost bringing to life the large, gold-framed paintings of vineyard scenes in various seasons. Grapes in the carpet design continued the theme.

Like the breakfast banquet, everything’s big, bold and gay at the Table Bay. Pianists on 24/7 shifts in the lobby bang out tunes exuberantly in the background to laughter, tinkling glasses and liquid refreshments for the larger group arrivals.

As importantly for weary travellers, the gaiety remains limited to the lobby. A floor or two up and the thickly-carpeted passages and suites are shrouded in sweet silence.

For the less sedentary, who want to burn off some post-breakfast kilojoules, an escalator from the hotel connects directly to the V&A Waterfront shopping mall. But I was content to rest in my comfortable suite’s wingback – watching the skiers, yachts and ships navigating the bay.

“The food here is very, very special. I go to Paris often for business and their restaurants, but the food here is first class,” enthused a French-speaking tourist, gesticulating favourably in that typically French style.

Fittingly, we met over the Belmond Mount Nelson hotel’s breakfast ‘mini-bakery’. Bread and pastries are, after all, a big deal for the Europeans. Such is the vast choice that one can live on bread (and pastries) alone at this iconic upper city hotel. Their cronuts converted me from being a savoury cheese croissant-lover to a sweet one. Made from the same dough as their plain, cheese and vanilla custard-filled croissants, cronuts are a deep-fried affair. Round, light, flaky and crispy, they’re topped with a generous dollop of the creamiest chocolate.

I couldn’t extract much information from restaurant supervisor Kyle about them, either. “Croissants and the scones are a closely guarded secret here. They both feature in our high tea also,” he said.

If you’re sticking with savoury, there is sourdough bread, wholemeal, rye, five grain, French baguette and Cape seed loaf, amongst other types. 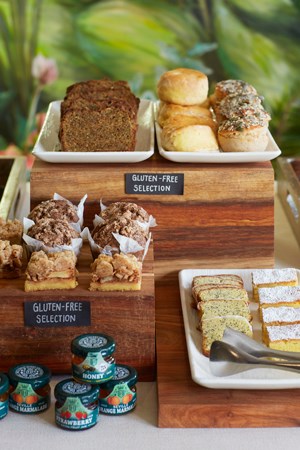 If you’re gluten-intolerant and rate your sweet pastries highly, this is the place to visit.  Especially after tasting the moist and fragrant lemon and poppy seed, apple crumble and banana cakes, amongst the numerous other gluten-free muffins and bread.

As importantly, your little ones – or the ‘little one’ within – will be equally happy here. After watching their waffle, flapjack or pancake being made, kids can choose toppings from a variety of sweet sauces, ice creams and a row of candy items.

With the glorious day we had, we opted to sit on the verandah with our pink berry smoothies, overlooking the aquamarine-coloured pool. Tables were well spaced for privacy and movement. An American-accented couple at the neighbouring table chatted in hushed tones, clearly enjoying that romantically-inspiring breakfast of oysters and bubbly.

My companion had smoked salmon and smoked mackerel – which she rated highly. While I explored a range of cream cheese with my baked goodies. Amongst them, a very tasty buffalo cheese.

Included a la carte items comprised grilled kippers, eggs benedict and rib-eye steak. I had the Croque madame, sans the ham. It was rich and tasty.

Having an omelette from the wide range of English breakfast items also tempted me as there were at least a couple of dozen filling options. Eggs come from pasture-reared hens, states the menu.

Service is slick, unobtrusive and when you catch a waitron’s eye, they catch it back and attend to your needs pronto. Of course, you wouldn’t expect differently from this five-star favourite. As its many foreign repeat guests attest to.

You may not get the variety or the service of the other destinations when you visit this idyllic venue, but a leisurely outdoor breakfast here is bound to almost guarantee joviality. With it's distinct garden party aura – given you can sit at the edge of rolling lawns and the hotel's tree-lined river walk – it's a popular spot for celebrating all manner of social and business occasions. Particularly in summer. What with the bird, floral life, fountains and views of the eastern slopes of Table Mountain.

Pick and choose from the four-star hotel's buffet – including Bircher muesli, home-made muesli and granola. Known for its trout and Eggs Benedict, vegetarians and vegans will enjoy their own equally-appealing versions thereof. Such as the Spinach Benedict with Emmentaler cheese. Or the roasted field mushroom, topped with cheese sauce, rocket and Parmesan. Also worthy of mention is the delectable French toast topped with apricot mascarpone. Vegans can munch from the salad station on carrots, cucumbers, olives and more. Or have some greens blended in a green juice comprising kale, cucumber, apple, celery and mint. If you've got a sweet tooth, you'll likely want a berry smoothie. And if you struggle to start your day properly without caffeine, you have a quality Quaffee from the Vineyard's internal roastery to look forward to here.

Though high ceilings characterise some parts of the 200-year-old building, chandeliers and tasteful art marry well with contemporary, comfortable furnishings in The Square restaurant. 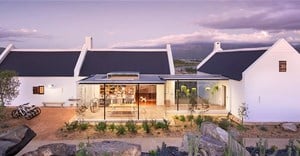 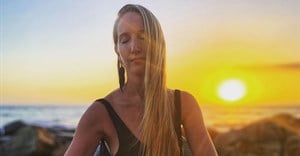 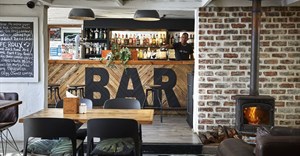 The newly-opened Labotessa Hotel is a stylish space17 Sep 2019 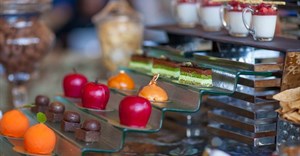