Second chance at life in Beginners

By: Eugene Yiga
Oliver (Ewan McGregor) is a strange guy. He's a 38-year old Los Angeles artist who designs CD covers for rock bands. But instead of doing the simple work they want, he prefers coming up with depressingly quirky cartoons like "The History of Sadness". His cynicism for life, and inability to form relationships that last, probably comes from his parents and the empty marriage they had for 44 years before his mother died. 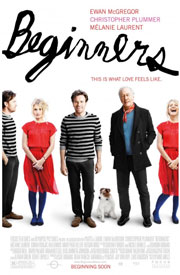 It's at this point that his father (Christopher Plummer) shares some shocking news. He's gay. And it seems that he wants to make up for lost time. Instead of just being "theoretically gay", the 75-year-old finds a young boyfriend, gets involved in activism and starts building a fabulous new life. Oliver is stunned. It's not because he has a problem with homosexuality; it's because he's amazed to see his father so willing to open up and take a chance at love. It's the kind of vulnerability Oliver can't (or won't) experience himself.

But just as Oliver and his dad get to explore an authentic relationship that they never had, there's more shocking news: his father is diagnosed with lung cancer. This development doesn't change the old man's new-found happiness. He continues to have fun with his new friends, leaving Oliver even more confused.

Oliver goes to a Halloween party dressed up as Freud. It's the perfect way for him to sit back and let other people talk about their problems so he doesn't have to talk about his. But then he meets Anna, a young French actress (Mélanie Laurent) who sees through his disguise. "Why are you at a party if you're sad?" she asks. As much as he tried to hide it, she could see it in his eyes.

Even though Anna has laryngitis and spends the evening communicating with nothing but a notepad, they have an instant connection. Finally, Oliver has the chance to build something that lasts. But will he sabotage this relationship as he did with all the others? Or will he take inspiration from his father, get over his fear of commitment and somehow make it work?

Beginners is an oddly interesting movie. It starts in the middle, then goes back and works forward to the middle while also going forward from the middle and working to the end, which in many ways is the beginning. Don't worry if it sounds confusing, it works quite well on screen. It also seems to represent Oliver's own sense of internal back and forth as he tries to figure out how events throughout history have come to affect him.

Like the recently released 50/50, Beginners is a movie based on real life. Writer-director Mike Mills had a father who came out of the closet at the age of 75, soon after his wife died. And like the movie 50/50, Beginners tries to take the heaviness of a cancer diagnosis and lighten the mood with some subtle humour. At times, it does get a bit too cute. (There's an adorable Jack Russell terrier with profound subtitled thoughts: "Tell her the darkness is about to drown us unless something drastic happens right now.") It's also a bit hard to cheer on the characters when even their fights are muted in case the drama gets too heavy.

All round excellent acting

Nevertheless, Beginners was a really enjoyable movie with excellent acting all round. (Christopher Plummer might even get an Oscar for his role.) Sometimes it gets a little too arty, like when weird montages reflect Oliver's thoughts. And sometimes it all feels too slow, like a lazy Sunday afternoon that just won't go anywhere. But, for the most part, it works pretty well.

In a broad sense, this movie is about letting go. It's about opening up to the chance of something better, knowing that it might mean something painful instead. That's what I experienced first-hand when I took the plunge into a new career, despite the safety of the one I left behind. Yes, it's scary, but wouldn't you rather risk failure than guarantee regret?

Simply put, it's never too late to start again. And sometimes going back to the beginning is the only way to find the happiness you've been looking for.