28 Nov 2011 | Email | Print |  PDF
The highly sought-after film rights to Zoo City - the 2011 Arthur C Clarke award-winning science fiction/cyberpunk/urban fantasy thriller penned by South African author, scriptwriter and journalist Lauren Beukes - have gone to Helena Spring, widely regarded as one of SA's most accomplished motion picture producers.
Beukes (@laurenbeukes) told Bizcommunity.com, "I'm thrilled Helena optioned it. She's got a fantastic reputation and a ton of experience. We've already started working on the script and it's great to see how her mind works. She asks all the right questions, really gets structure, the rigours of adaptation and is pushing this to be the best thing it can be, while maintaining its distinctive Joburg flavour.

"It's just the first step"

"It's just the first step, of course. Movies take a long time to make (that pesky raising-millions-of-dollars thing) but I think it's in fantastic hands and it's a privilege to be able to work on the script. Most novelists don't get to do that (or don't want to)."

Spring will soon be putting the project out to a select party of directors, while Beukes has first look as screenwriter to adapt her novel for the screen.

"Lauren is perfectly placed to do this; the characters are alive inside her," says Spring, whose career in the entertainment industry spans nearly three decades, during which time she has produced over 20 motion pictures. This includes the first-ever SA film to receive recognition at the Academy Awards; in 2004, Darrell Roodt's Yesterday earned a Best Foreign Picture nomination. She has also worked with some of the foremost filmmakers in the world, such as Paul Greengrass (The Bourne Supremacy and (The Bourne Ultimatum), and Academy Award-winner Tom Hooper (The King's Speech).

According to Beukes's literary agent, Julian Friedmann of Blake Friedmann, "Helena outbid all the others in a spirited auction for film rights to this extraordinary book: she had an extremely proactive, writer-friendly approach to working with Lauren and offered an imaginative and creative proposal that was irresistible."

"I'm delighted to have secured the film and television rights for Zoo City," comments Spring. "It is a ground-breaking, magical novel begging for a life on the big screen. Lauren's storytelling is masterful - edgy and futuristic, unique yet universal. It is high in entertainment value yet emotionally charged - a dream project for any producer."

Set in a futuristic, gritty and hard-core Johannesburg

Zoo City is set in a futuristic, gritty and hard-core Johannesburg, where the eponymous ghetto has been colonised by society's outcasts - sucha as criminals, drug-dealers and psychopaths, and their animal companions. Like the other residents of the Zoo City slum, 'Zinzi', the anti-heroine, is 'animalled', but she is also a shrewd, street-smart girl with the gift (or burden) of finding lost things. Zinzi wears her power animal, a sloth, on her back. When she is hired to find a missing teenybopper star, she hopes that it will be her ticket out of Hell's waiting room.

Says Beukes, "Every novelist dreams of a movie deal - but you actually want more than that. You want to find a producer of great vision and integrity and experience who fundamentally gets the book and understands how to transform it into an entirely different creature based on the same genetic material. I'm thrilled that it's being produced in South Africa - for an international audience."

Beukes's next two novels are due in 2013 and 2014, under the working titles of The Shining Girls and Broken Monsters; they were recently picked up by publishers in the US, the UK, SA, Italy, the Netherlands and Germany in a "megabucks" book deal.
Email Print PDF 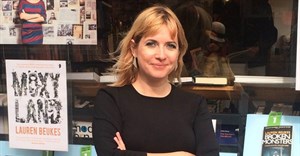 #FairnessFirst: Lauren Beukes on enhancing your own creativity through inclusivity29 Apr 2019