By: Daniel Dercksen
Producer, writer and director Judy Naidoo's Kings of Mulberry Street brings together the rich and colourful world of the Indian community in the '80s as well as Bollywood cinema and songs from that era, in a tale that peers into the past through the prism of the present.

The charming and hilarious Kings of Mulberry Street tells the story of two young Indian boys who have to find a way to overcome their differences and unite, in order to defeat the bullying local crime lord who’s threatening their families. A marvellous adventure, with universal themes that will appeal to the whole family, the film also pays tribute to classic Bollywood movies and their heroes.

Feisty Ticky Chetty is a skinny kid who enjoys the outdoors, is creative and energetic and has tonnes of street smarts. He lives in a Bollywood dreamworld where he’s an unbeatable action hero and rooftops are his kingdom. He is looking for a partner in crime and sees a trainee in Baboo. Chubbier than and more bookish that Ticky, Baboo is equally imaginative and spirited. These two nine-year-old misfits decide to rid their community of the evil crime boss Raja, and they soon discover that they have lots to learn from each other.

Judy Naidoo is a South African independent filmmaker. She holds a master’s in producing from the National Film and Television School (NFTS) in the UK. She was the recipient of two scholarships that enabled her to pursue this degree: The Ford Foundation International Fellowships Award and the Trevor Jones Scholarship. Naidoo also completed a certificate in filmmaking at the New York Film Academy (NYC) in 2006 and holds a BA (Dramatic Arts) Honours degree from Wits University (majoring in directing and television). Naidoo enjoyed success on the local and international film festival circuit when her debut feature Hatchet Hour (2016) scooped several prestigious awards, including Best Director and Best Picture at the New Hope Film Festival in Pennsylvania, as well as the Best Foreign Film Award at the LA Femme International Film Festival.

For Naidoo, who grew up in Verulam, the story is close to her heart.

"My childhood and the playful fantasies of my nine-year-old self provided fertile soil for story inspiration. I was always a tomboy and I related best to boys at that age. I also knew kids who were really off the wall, funny, crazy boys, so I could vividly imagine these characters. I wanted to showcase a world that has not been featured in local cinema before and communities that have not been represented on the big screen. What better place than where I come from? The characters of Raja and Size are inspired by some of the shadier people who operated in locations in Verulam and Tongaat, which together make up the fictional town of Sugarhill District."

What inspired Kings of Mulberry Street?

Whilst pursuing a short filmmaking course in New York City, a lecturer who saw some potential in my work encouraged me to tell my own stories.  He encouraged me to tell stories that were personal to me. At that stage, I had no ideas brewing in my mind, but on the long flight back from the US the story Kings of Mulberry Street emerged. I dreamt up the characters of Ticky and Baboo – they were largely inspired by the weird and whacky kids I once knew growing up near a low-cost housing area. And being a strange kid myself, I could see myself in both those characters. The rich and colourful world of the Indian community in the ‘80s, as well as Bollywood cinema and songs from that era, provided the inspiration for this story. What did you find so charming about the Bollywood films of the ‘80s?

My personal experience with Indian cinema (not just Bollywood) goes back as far as I can remember. I did not have a particular fondness for Indian films, often my siblings and I watched them because my parents hired them to watch. We didn't speak the languages, there were no subtitles, but we still understood the films perfectly. As a treat during school holidays, my parents would hire three films for us – one in English, one in Hindi and one in Tamil. Every now and again, an Indian film would emerge that would have an impact, either because of the songs or the story. I remember lots of crying too because the films were so moving. I was drawn to action and comedy films, especially ones in which the women literally kicked ass.

Who were your Bollywood heroes of the time?

I didn't really have a Bollywood hero but Rajinikanth and Amitabh Bachchan were big names and their films well loved by many in SA (as in India). There was, however, one Indian actress that made some impression on me. Her screen name was Silk. She was way ahead of her time. She also did action movies. It was the first time I had seen someone on screen who looked like me and who was taking on unusual female roles. Alas, she committed suicide in the ‘90s. I only found out much later that she was a very sought-after actress in India because her raunchy dances and sex appeal made her a big money earner at the box office.

How has your love of Bollywood films found expression in Kings of Mulberry Street?

I didn't realise what an impact Indian cinema had on my formative years until I started developing this film. It unleashed all my childhood memories and Bollywood often featured as the soundtrack to those early years.

We had quite an extensive casting search for both the child actors and the adults. It took approximately six months, and I was very hands-on in the process.

We found the Baboo character quite early in the casting process, although we only cast the role a couple of months later. However, we couldn't find Ticky. We had to go to public schools in KZN and we only found him after a really long process and many callbacks. He happens to be from my hometown of Verulam. Tell us about the Johannesburg/Durban culture clash in Kings Of Mulberry Street?

In the ‘80s, you were a "big shot" if you came from Johannesburg. Joburgers spoke differently and some looked down on Durban people for being backwards. Joburgers were more broadminded and liberal. Durban was more conservative. It was also a time of segregation and Durban was made up of pockets of Indian communities who were themselves segregated.

Why did you choose to shoot in Verulam?

The film is a homage not only to ‘80s Indian cinema but also to where I come from. I wanted to showcase a world that has not been featured in local cinema before and communities that have not been represented on the big screen. What better place than where I come from? Locations in Verulam and Tongaat together make up the fictional town of Sugarhill District. I have used the best and most cinematic locations from both these two little towns to create the vibrant world of the story.

Describe the language and patois used in Kings of Mulberry Street.

Because the film is set in the late ‘80s, it has a certain ‘80s vibe. From set design to wardrobe and cars, everything stays true to the period. This includes the language, which is also specific to the community in which the story is set. It’s a unique blend of Indian and South African languages – a proudly South African concoction.

No Indian film would be complete without at least one great dance sequence. How have you incorporated this element into Kings of Mulberry Street?

The film pays homage to ‘70s and ‘80s Indian cinema. It is not a Bollywood film but there are many aspects of Bollywood that have inspired the style and form of the story. I worked with a Durban-based choreographer and we auditioned dancers from all over KZN and selected a variety of age groups to feature in the film, from little ones to adults. We also worked closely with the community to include them in some of the dance routines and scenes. The lead child actors underwent an intense six-week acting and dance rehearsal period.

It’s worth mentioning that during our casting process we ended up with seven options for the roles of Baboo and Ticky. At the final call, I promised both the children and their parents that those who were not selected would still feature in the film – in the dance sequences and in bit parts. All the kids are present in the big dance number. They are all talented and deserve to have exposure.

Describe the film’s soundtrack and who you brought on board to handle this aspect.

The soundtrack also pays homage to Indian cinema and to my hometown. I wanted to fuse African musical influences of my childhood with certain culturally-specific sounds that were significant to Indian communities. Audiences are treated to some legendary Bollywood songs. The film needed a vibrant score reflective of the times and the community it represents. Composer Brendan Jury and I collaborated with Neville Pillay to create an original track for the film.

For the latest and upcoming South African films, visit: writingstudio.co.za/south-african-filmmaking 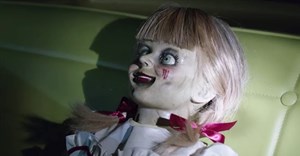