By: Michael Britton
Since 1998, the Baxter Theatre Centre has been running Ikhwezi, a cultural outreach festival. This year, the festival presents 12 new plays, and if the two plays showcased on opening night are anything to go by, it promises to be well worth getting along to see a few shows. With a host of new acting talent on display, and featuring the work of new playwrights, it's hats off to the Baxter for their efforts in bringing community players to mainstream theatres. A Plague of Heroes

Thami Mbongo shines in a powerful story full of emotion and humour. Based on the experiences of writer Vusi Mazibuko, it tells the story of a bright teenage schoolboy dazzled by the glitz and bling of the local gangsters. The moneyed “heroes” of the township seem to have it all - cars, clothes, and women. After a brief and intoxicating life of crime, Vusi is left a paraplegic. His efforts to reform his life and redefine his view of heroism make for thought-provoking theatre and provide a witty and unsentimental South African parable.

Thabi is a young matric girl who lives with her blind grandfather. A bright student with lots of promise and potential has her dreams shattered when she becomes pregnant. Her school has been awarded a bursary to allow Thabi to further her studies, but the terms and conditions of the bursary specify that no pregnant students will be accepted. The school urges her to get an abortion, but her grandfather is outraged. Thabi's lonely attempts to balance the demands from all sides climax in some compelling theatre.

The Ikhwezi Festival runs until 20 March, 2010. Book online through Computicket. Price per show is R35. 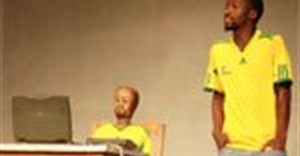 The Best of Ikhwezi Theatre Festival at The Baxter16 May 2010