Forestry, fisheries and the environment minister Barbara Creecy has welcomed the declaration of the Ingula Nature Reserve as a wetland of international importance...

In yet another turn in what is already a six-year legal battle, Uthaka Energy, a coal-mining company, has been interdicted by the Pretoria High Court from mining in one of South Africa's critical water source areas...

In just the last five years South Africa has faced two of the biggest challenges imaginable. We are in the midst of a once-in-a-century pandemic and...

Africa is the continent most vulnerable to the impact of climate change. That's largely because many of its people and governments are too poor to do what's needed...

New targets to protect biodiversity must include farmers and agricultureArticle

Evidence shows that farms that share landscapes with wild nature, such as remnant forests and trees, benefit from the ecosystem services provided...

Babanango Game Reserve promises a captivating bush experience, and they definitely deliver on their promise. Situated in the heart of Zululand in KwaZulu-Natal, this new kid on the block is something special...

Flowing through 11 African countries, the Nile River plays an important role in the lives of more than 24% of Africa's population...

The Intaka Island Environmental Trust for the wetlands at Century City, Cape Town, was recently awarded in the Environmental Education and Skills Development category of the 2020 National Wetland Awards...

Coastal and marine economy: Can it be salvaged from the impacts of poor water quality?Article

We (the citizens) need to re-establish an ecological healthy relationship between nature and culture...

Can Covid-19 inspire a new way of planning African cities?Article

Health crises are not new in Africa. The continent has grappled with infectious diseases on all levels, from local (such as malaria) to regional (Ebola) to global (Covid-19)...

South Africa has officially entered lockdown Level 2 - which allows for leisure travel within the country. This offers an opportunity to explore some of the country's hidden gems, one of which is the West Coast Way in the Western Cape...

Melun Jeptha noticed two empty plots of land that were being used as dumping grounds and decided to do something about it...

Is Clover committed to being better in every way? I don't think soArticle

The Clover campaign provides the ultimate guide to what greenwashing is, but more soberly, the impacts are yet to be felt...

"During the past four decades, the southern and northern slopes, as well as the mountain tops of the Outeniqua Mountains have fallen prey to the aggressive spread of invasive alien plants, in particular wattle and pine trees."

5 ways to make your trip along the Garden Route sustainableArticle

As South Africa slowly starts easing travel restrictions within the country during its Covid-19 lockdown, sustainable and safe travel will be one of the ways the local tourism industry will get back on its feet...

#WorldEnvironmentDay: Celebrating biodiversity in the times of Covid-19Article

The global havoc brought by Covid-19 is not only exposing the triple challenge (inequality, poverty and unemployment) in South Africa that we have always known about, but how slow we have acted on fixing them...

Why plantations are not green desertsArticle

Ahead of the United Nations' International Day of Forests on 21 March, Forestry South Africa research and protection director Dr Ronald Heath talks about how the commercial forestry industry is leading the way in conserving and rehabilitating areas of high biodiversity value. He also challenges people to think differently about plantations...

For the past two decades, City of Cape Town transport planners, environmentalists, civic groups and local residents have locked horns over a controversial proposal for a new road link...

How South Africa's mangrove forests store carbon and why it mattersArticle

Scientists around the world are looking for ways to remove carbon dioxide from the atmosphere...

Rwanda is training health workers for an interconnected worldArticle

Growing scientific evidence shows that environmental transformations such as climate change and pollution are linked to people's health...

The Ramsar Convention decided on the international theme of 'Wetlands and biodiversity' for the year 2020...

Travel treasure troves in the treesArticle

The lack of access to sanitation is a global emergency. We urgently need solutions that are safe for the people who use them and sustainable for the planet...

Why South Africa's wetlands are in urgent need of rescueArticle

Environment, forestry and fisheries minister Barbara Creecy recently launched the third National Biodiversity Assessment (NBA), which is a scientific reflection of the state of the country's biodiversity...

Circular cities of the world: What can green infrastructure do?Article

As the population of the world's cities grows, so too does resource and energy use as well as waste generation. We can combat these issues with a circular economy that uses nature as a template...

Sea level rise caused by global warming is already causing damage to public and private coastal property in Cape Town. In some areas retreat to higher ground may be necessary...

From Cape Town to Kisumu and Greater Manchester, cities around the world are seeing the benefits of festivals that celebrate traditions and people...

In its latest report, the Intergovernmental Panel on Climate Change describes how agriculture, deforestation, and other human activities have altered 70% of the land on Earth's surface...

Groundwater reserves in Africa are estimated to be 20 times larger than the water stored in lakes and reservoirs above ground...

Bon Hotels to take over hotels in Rundu and Walvis Bay, in addition to its Swakopmund hotel...

Small pelagic fish, generally processed, sold and eaten whole, account for three-quarters of the total inland fish catch of the continent but because of their low economic value they are not given the attention they deserve...

Circular cities of the world: What can green infrastructure do?Article

More than half of the world's population currently lives in cities while projections show an increase to two thirds by 2050...

Financial incentives could spur cities and landowners to protect wetlandsArticle

With partnerships between landowners, the government and businesses, South Africa can invest in its wetlands and boost the country's potable water reserves...

SA agriculture learning to dance with the windArticle

The industry remains resilient despite major challenges and limitations...

Scientists from a transdisciplinary research team are investigating how investments in ecological infrastructure protect society against hydroclimatic risks, including droughts and floods...

5 fun things to do in Richards BayArticle

The partnership aims to ensure effective alignment of CIFOR's restoration activities within the AFR100 framework... 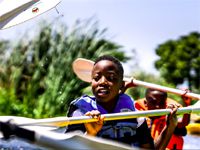 Who goes canoeing through a township? For Siyanda Sopangisa, it’s a natural progression from his days of swimming in Khayelitsha’s wetlands. The waters were an integral part of his childhood. But over time, he watched as the river filled with trash. “The wetlands I knew as a young boy were gone,” Sopangisa says. He didn’t despair. Instead, Sopangisa saw an opportunity. Not only would he restore the river – he’d do it from a boat. Read Siyanda Sopangisa's full story here.

On 22 March the global community will celebrate World Water Day. Central to the global message is that there is one Earth with limited natural resources...

The City of Cape Town has secured R50,4m in funding to create 1,300 green jobs for entry-level job-seekers who will assist the City with the removal of invasive species in local ecosystems...

Wetlands support millions of people around Africa. They include all areas that are permanently or frequently covered by water, and could be at the edge of a lake or the mouth of a river...

Carbon farming: How agriculture can both feed people and fight climate changeArticle

In only a few decades, traditional dryland farming on drained peat soils will be increasingly difficult as the rich organic soils vanish and flood prevention becomes too costly...