Reaching for the stars

12 Apr 2013Save | Email | Print |  PDF
By: Eugene Yiga
Given that he grew up in a musical household and started performing at a young age, it seems inevitable that Drew Rienstra wound up in the arts. In this interview, the 30-year old producer and director from New York chats to us about his impressions and hopes for the Cape Town theatre scene.

Eugene Yiga: What sparked your decision to move to Cape Town?

Drew Rienstra: I relocated to Cape Town a year ago after chewing on the idea of starting a theatre company here in South Africa. I originally came on holiday and fell in love with the weather, the beach, the people, the vibe and the chance for endless opportunities. There was no way I could go back.

EY: And what are your impressions of the Cape Town theatre scene compared to what you're used to in New York?

DR: While it's exciting to see so much passion for the arts here, I feel that there are certain areas that can allow for development and growth. I also miss seeing long runs of shows and shows that have been refined and presented in their very best form due to financial backing allowing for these longer runs.

EY: Could you tell us more about (your production company) Chase the Sun? What do you guys do?

DR: Chase the Sun was born out of a desire to aspire to create more opportunities for theatrical growth in all spheres, from production, to performance, and even education. Cape Town should be the arts capital of South Africa and there's so much unexplored potential here. Audiences are ready. Theatre should be a more of a rewarding experience; you should leave feeling something, whether it's happiness, anger, sadness, questioning or even ultimately, reflection.

As a production company, we are looking to start producing in the near future. My team is a fantastic mix of American and South African creatives, bringing together the best of both of our cultures. We've described ourselves as passionate theatre makers with New York sophistication and a Cape Town heartbeat, which I hope speaks for itself in all of our past achievements. 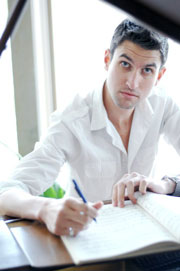 EY: And could you tell us more about Play Club, which you've described as a book club for theatre lovers?

DR: Play Club was born out of the lack of connection within the industry. There are so many pieces all working in competition together. The beautiful part of New York that I miss is the community element in the theatre scene. There's so much support and love for other actors and shows. There's very little competition and often room for artistic exploration.

EY: So how does it all work?

DR: Play Club is a monthly initiative to bring together professional creatives in the industry and to inspire and aspire for more. It's a table reading, which serves as a platform and catalyst for development and debate. Using world-class scripts as a neutral platform, we drink wine and explore together through the readings and spend the rest of the evening in intense and thought-provoking discussion.

In the tradition of "Inside The Actor's Studio" (a popular American television programme interviewing top actors, specifically for drama students), we've opened up the experience that was once only open to the 13 at the table to aspiring drama students, theatre-goers and those interested in the creative process of professionals. It's a chance to see some of South Africa's best actors working up close and personal.

EY: Who's been attending so far?

DR: Play Club has played host to some of South Africa's top and up-and-coming actors, directors, educators, filmmakers, producers, playwrights and composers, all intermixed with theatre-goers who share in their passion for the future of the South African theatre. Its actors have performed on stages the world over, won international acclaim in the US, the UK and in southern Africa, and have been featured in hit shows on TV and film. It has truly become the place where professionals come to play.

EY: Where and when do you guys meet?

DR: We've been really lucky to have had Nicholas Spagnoletti and Edward van Kuik from Alexander Bar provide us with a fantastic venue to host the monthly evenings. We're excited for audiences to see a play that could potentially grow into a fully realised production and to see how many ideas were perhaps first born in front of their eyes at Play Club!

EY: How do you choose the scripts?

DR: In each Play Club, we attempt to find scripts that are daring and brave, fresh and funny or charming and honest. Our past plays have been some of the best modern scripts being produced all over the world. We search tirelessly to bring the best new plays around and introducing them into the creative conscientiousness in South Africa.

EY: What are you guys doing next?

DR: Next up is Tony Kushner's theatrical masterpiece, Angels in America. We will be reading both parts of this Pulitzer and Tony Award-winning play. The script is a modern-day masterpiece in writing.

EY: Why Angels in America?

DR: Angels in America is personally one of my favourite scripts. In my opinion, it's one of the greatest plays ever written, putting Tony Kushner in the same ranks as Edward Albee, Tennessee Williams and Arthur Miller. Kushner wrote Angels while working as a Professor of Playwriting at Princeton. The line it walks of high drama and comedy is beautiful. The writing is incredibly accessible and the characters and experiences are so tangible, but also so very theatrical. When the play debuted in 1993, it was still in the middle of the AIDS crisis and was so brave in putting a face into the black void of the epidemic that America tried to brush over. Recently, it has got attention with the HBO miniseries starring Al Pacino, Meryl Streep and Emma Thompson, as well as a brave new revival of the script in New York.

The play is also so timely here in South Africa with so many living with the daily reality of AIDS. I'm excited to use the pathos and ethos of the play to put a face on AIDS, and make strides forward towards ending the stigma of being "positive". And what better way to close out our series on "The Human Experience"? Though the detail within our walk of life may be different, human experiences are universal. Love, hope, strength, struggle, fight, integrity, honour, greater good, higher power, fitting in ... This show, in particular, explores what heights we ascend and depths we descend when facing life-changing experiences, even having visions of angels while in our darkest moments - finding hope amidst the chaos.

Chase the Sun's next Play Club (Angels in America) takes place in the conference room of Cape Town's Alexander Bar on 17 and 24 April. Bookings are R150 and include wine as well as a copy of the script for you to keep. Tickets are extremely limited and available from Quicket. For more information, follow @ChaseTheSunSA on twitter or go to www.chasethesun.co.za.
Follow

Eugene graduated from the University of Cape Town with distinctions in financial accounting and classical piano. He then spent over two-and-half years working in branding and communications at two of South Africa's top market research companies. Eugene also spent over three-and-a-half years at an eLearning start-up, all while building his business as an award-winning writer. Visit www.eugeneyiga.com, follow @eugeneyiga on Twitter, or email moc.agiyenegue@olleh to say, um, hello.
Like Save Email Print PDF
Comment
Comment guidelines and disclaimer
LEGAL DISCLAIMER: This Message Board accepts no liability of legal consequences that arise from the Message Boards (e.g. defamation, slander, or other such crimes). All posted messages are the sole property of their respective authors. The maintainer does retain the right to remove any message posts for whatever reasons. People that post messages to this forum are not to libel/slander nor in any other way depict a company, entity, individual(s), or service in a false light; should they do so, the legal consequences are theirs alone. Bizcommunity.com will disclose authors' IP addresses to authorities if compelled to do so by a court of law.