The happy feet of Tap Dogs

By: Eugene Yiga
Following its Australian debut in 1995, Tap Dogs has performed in front of more than 12 million people in more than 300 cities around the world. Now, after multiple awards (and an appearance at the opening ceremony of the Olympic Games in 2000, which was televised to more than half the planet) the guys are tapping up a storm in Cape Town.
It all started with creator and choreographer Dein Perry, who worked as an apprentice machinist by day and tap danced with his friends by night. He later used a small government grant to put together an early version of Tap Dogs, which, thanks to a collaboration with director/designer Nigel Triffitt and composer Andrew Wilkie, eventually turned into the full production.

The dancing is spectacular

Mirroring his work experience, Tap Dogs is set on a construction site in Newcastle (a "steel" town north of Sydney) where six dancers come together in one unbelievable show. The set contains the typical things they'd encounter on the job (scaffolding, angle grinders, and so on), which are combined with lighting and special effects to create some incredible scenes. And, of course, the dancing is spectacular, whether it's on inclined platforms, vertical ladders, or even upside-down.

Anyone who saw their South African performance a few years ago is probably already familiar with this concept. But to keep things fresh, Tap Dogs now has two female percussionists to add a different energy to the group of macho men. "I'm very excited to be performing in front of South African audiences," Catriona Hunter said. "I have no doubt that they'll appreciate the blend of tap and drums. We have a great time on stage and go really hard at our drumming, so I think the audience will embrace that energy and spirit of fun as well."

Gasps of awe and thunderous applause

Perry is equally thrilled to be back in the country. "Tap Dogs resonates strongly with audiences here," he said. "They love the rhythmic tone of the work and I think [they] appreciate that unique Australian spirit that comes through."

He's right. All in all, this is a really energetic experience. Even though there are some solos and quieter parts, it's basically 80 minutes of high-energy and high-volume dance, which barely gives them a moment to catch their breath and barely gives us a moment to blink our eyes. Judging by the audience's gasps of awe and thunderous applause throughout the show, this tap won't be running dry any time soon. 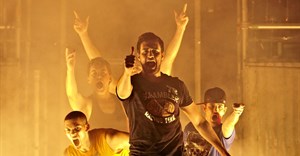 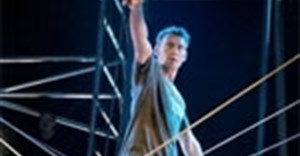