By: Michael Britton
International Guitar Night (IGN) is a series of shows designed to bring "the world's greatest and most accomplished acoustic guitar players" to South Africa. The brainchild of Tony Cox, South Africa's own internationally acclaimed guitar wizard, the stated focus of IGN is to feature guitar players who "pluck the strings creating bass, rhythm, melody and percussive lines all at the same time, coaxing a mini-orchestra from the six strings". 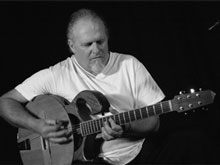 Since its launch in South Africa in 2010, the show has featured some awesome talent, usually one young international artist and one local artist, and guitar guru Tony Cox himself. The current show, presented by Tony Cox, showcases two Canadian-born performers, although one of them, Natasha Meister, is currently based in South Africa.

A bit of vocal modulation would not go amiss

Natasha opened the show, belting out her own material in her powerful and soulful voice, accompanying herself with skilful and bluesy electric guitar. I have heard Natasha play before, with the Natasha Meister Band at the Barleycorn Music Club, and was looking forward to seeing how she does as a solo artist. There is no question that this young woman is an accomplished performer with a great future ahead of her. I must confess to a small disappointment that she chose to play electric guitar rather than acoustic guitar. But then, perhaps her voice is not suited to the subtlety of an acoustic set. I fear for this young woman's voice if she continues to belt out all her material at the intensity she brings to her music. A bit of vocal modulation would not go amiss.

Tony Cox played out the second set of the first half. This man doesn't put a finger wrong. I never cease to be amazed by the sounds that he can get from an acoustic guitar. It's not often that he sings, but he has a more than pleasant voice and on the opening night he sang along to a couple of songs - one a protest song, the other what he called a sentimental song for his daughter. There is an extraordinary contrast between the Tony Cox who is so laid back and relaxed as he makes his droll introduction to the next number, and the Tony Cox who, with precise and passionate intensity produces a consummate performance. He seems to be mildly surprised that we should applaud his wizardry with whistles and shouts of appreciation. I am sad that my favourite Cox number, You Asked For It, no longer forms part of his play list. However, the brilliant Slap Chips, nearly makes up for it.

The second half of the show features Canadian Joel Fafard, who plays brilliant slide on the instrument made for it - a resonator guitar. Whether he was playing his own compositions or performing Southern roots and blues, this guy rocks. His voice, a gravely groan and croon, carries echoes of the call and response of a field holler and, teamed with superb slide guitar and a whole lot of edgy urban cool, makes him a compelling performer. I couldn't catch all the words of the stories he tells while tuning his guitar between numbers (a combination of a Canadian accent, my ageing ears and acoustics in the Olympic Bakery), but I enjoyed his songs. He brought new life to old numbers, such as Willie Dixon's Spoonful and Muddy Waters' I Can't Be Satisfied, but also impressed with his own material, such as Cluck Old Hen, the title track from his latest album.

I'm a blues fan, and a long-standing Tony Cox fan, so this might be a biased opinion, but I can say quite objectively that it would be worth your while to get to this show. If you love guitar music, and especially if you love the blues, this season of International Guitar Night is not to be missed.

P.S. For those of you who do not already know, Tony Cox presents a Sunday afternoon show on Fine Music Radio, in which he features all the astounding guitarists that you could ever wish to hear. It's a great show for a chilled Sunday.