Looking into Other People's Lives

By: Eugene Yiga
It's happened to a lot of us. We live in large apartment blocks and can't help but wonder about neighbours, many of whom could be total strangers for years on end. Who are they? And what's going on behind closed doors?

"I've always been fascinated by the ways in which people isolate themselves, especially in big cities," said writer Amy Jephta. "You can live your whole life in a bubble and not be affected by what happens right in front of you until it touches your life in some way."

And so we have Other People's Lives. It tells the story of two couples: one heterosexual and white (Lauren Steyn and Carel Nel) and the other interracial and lesbian (Carla Fonseca and Jayne Batzofin). They barely know each other and don't have much in common besides living in the same dingy building. But all that changes when a violent incident causes their lives to collide. 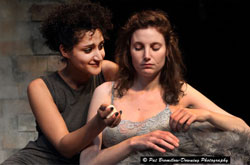 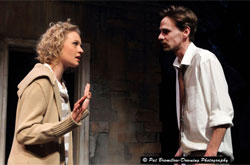 Far more interesting than the characters (mostly well-acted, although at times a bit excessive) or the plot (typical relationship ups and downs) is the way the story is told. The set is split down the middle so that one flat functions as two. It gets a bit distracting when both couples are in the same space at the same time, but I guess that the "spill over" is used to emphasise that they're all connected, even though they don't realise it yet.

And then there was the chronology, which basically had each couple living in a different time. Much like in the movie Memento, this means that you can see how the story is going to end, but aren't quite sure how it'll get there. This device added a fascinating layer of complexity. Unfortunately, it also led to a small but easily avoidable, discrepancy in the timeline when one character made reference to a pregnancy that didn't yet exist in her world. The fact that members of the audience picked this up made me wonder how it went unnoticed during the rehearsals.

In the end, Other People's Lives attempts to address some big issues (racism, homophobia, etc), not all of which can be fully explored in a play that's only an hour long. Still, it's likely to leave you with a greater sense of curiosity for the people who live next door. Perhaps it's a good idea to get to know them before it's too late.

Other People's Lives, the first of four plays in the Spring Drama Season, is showing at the Artscape Theatre, Cape Town until 29 September. Tickets are available from Computicket. Special discounts are available for students and groups of 10 or more. Additional offers are available via Artscape box office on +27 (0)21 421 7695.