Kaapse Stories From The Mother City

By: Eugene Yiga
Cape Town is a vibrant city with a rich cultural heritage. But don't just take my word for it; come and enjoy a slice of the magic with Kaapse Stories From The Mother City, now showing at Richard's Supper Stage. 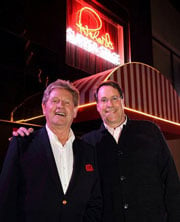 This dinner-and-theatre bistro is the creation of German businessman Roland Seidel and theatre producer Richard Loring. Seidel, who first saw Loring's African Footprint in 2003, always wanted to offer the tourists on his farm a perspective of the Cape that combined music, culture, and food. But it wasn't until mid-2011 that Loring and he made the investment decision that eventually became this restaurant.

They've done quite well so far, considering that they opened in the middle of an unusually cold winter and had to compete with major sporting events like the Olympics and Euro 2012. That must be due to the warm atmosphere created by the relaxed décor and friendly staff. Looking around at the variety of patrons, from families with young kids to friends on a girls' night out, I got the impression that everyone was having a great time. Kaapse Stories From The Mother City, which opened in July, is the venue's first show. Set in Sea Point and told from the perspective of Grandpa Kleintjies, it's based on the true story of one family's struggle to survive racial divide under the apartheid regime. "While all of this might sound like fodder for a story of melodramatic proportions," said writer and director Basil Appollis, "the truth is that when people face uphill battles, they learn life lessons and the Kleintjies' story bears testament to this."

There were definitely a lot of aspects to enjoy. All members of the cast (clearly quite talented individuals) entertained us with a variety of powerfully performed songs. Unfortunately, with so many different people telling so many different stories, the medley became a bit messy. And because Grandpa Kleintjies was given the most time to talk about his life, I struggled to connect with anyone else.

Instead of showing all the colours of the rainbow nation at once, perhaps it would have been better if the entire show was based on only one or two characters at a time. Yes, it would have been shorter, but less width might have meant more depth. And by rotating the performers every night, viewers would have a good reason to keep coming back for more. Cape Malay with a Mediterranean twist

Of course, that's only one aspect of the experience. There was also a three-course meal, which was preceded by some wonderfully welcome champagne. The food, by chef Uli Stamm, is described as Cape Malay with a Mediterranean twist. That meant a Bo-Kaap platter for starters (homemade snoek paté, piquant samosa, and roasted Mediterranean vegetables) and a South African platter for dessert (koeksister, malva pudding, milk tart, and a skewer of fresh fruit).

But wait, there's more. In-between these two served dishes was the main buffet, the maître d's mention of which elicited gasps of anticipation and groans of approval from the eager crowd. And boy was there a lot of choose from! Korma chicken and prawn curry; baked Cape Yellowtail fish; Cape Malay vegetable breyani; sliced beef fillet; and a variety of vegetables, from spicy carrots and green beans (with a hint of nutmeg) to roasted butternut drizzled with honey and almond flakes. In a word: yum!

In my attempts to get a holistic idea of the offering - it was all for you, dear reader - I went for a little of a lot. Alas, much like with the show itself, having so much variety made it hard for anything specific to stand out. Don't get me wrong; the food was great. I just wonder if a more focused selection (perhaps based on the culture of whichever character was performing on that particular night) would have been better.

Yes, it's hard to limit choices in case some people don't like what's being served. But, as in life, sometimes the bold options that take you outside your comfort zone are the most rewarding. Besides, there's not much point in travelling halfway around the world for an authentic Cape experience if you're going to stick with the safe choices you've had before, but (unsurprisingly) can't remember where or when.

So, is Kaapse Stories From The Mother City worth checking out? If you're a tourist, the answer is yes. On the night I went, the tables filled with travellers from afar seemed to be having the most fun. They were the first to dance on stage in one of the Miriam Makeba songs and they were the first to jump up in thunderous applause at the end of the show. As for the locals, it's hard to say. I didn't get a fresh insight into Cape Town culture simply because I've lived here for so long. I was also a bit irked by what sometimes felt like stereotypical portrayals of a city far more diverse than what I saw on stage.

Fortunately, Kaapse Stories From The Mother City isn't the only reason to visit Richard's Supper Stage. On Saturdays (and possibly additional nights of the week as summer arrives), an after-dinner show features up-and-coming musicians performing with some established names in the industry. This platform for promoting young and undiscovered Cape Town talent could very well become quite popular, especially when it's combined with the wide range of reasonably priced food and drinks in the normal restaurant downstairs. Capetonians probably don't need much more than that.

Kaapse Stories From The Mother City is showing at Richard's Supper Stage and Bistro in Cape Town. Tickets are available from Computicket and include welcome drinks and a three-course meal. For more information, go to www.richardscapetown.co.za, email az.oc.nwotepacsdrahcir@sgnikoob or call +27 (0)21 434 6738.