Going out of Just Business

By: Eugene Yiga
After the success of playwright Mike van Graan's Hostile Takeover, which was runner-up in the 2005 PANSA Festival of Reading of New Writing, comes Just Business. And after this reworked and renamed version enjoyed a successful world premiere at the recent National Arts Festival, where it won a Standard Bank Ovation Award for excellence on the 2012 National Arts Fringe, it is now showing in Cape Town for a limited run.

It's hard to say exactly what Just Business is about. Simplifying the premise of this dark comedy to "a white man, a black man, and a coloured man try to make it in post-apartheid South Africa" seems like the start of a bar joke. And their fast talk seems like something straight out of a sitcom. Yes, there were a number of genuinely funny moments, but others (eating sushi from an inflatable sex doll?) felt too close to slapstick. Unless that was the point.

Even though the audience was happily laughing throughout most of the show, part of the comedic excess actually made it hard to take Just Business seriously. Unless that was the point. (It was also a little hard to take a contract killer seriously when he seemed more concerned with political rants and easy puns than doing his job.) Still, I think the sad but true message in Just Business is that nowadays who you are matters a whole lot less than who you know. This didn't come through as clearly as the message in Van Graan's Green Man Flashing, but it still was there.

Acting their pants off (literally, in one case) to bring this message out are André Jacobs, Mbulelo Grootboom, and Kurt Egelhof. The three leads are such strong performers that they keep Just Business running and more than make up for the areas where the script falls short. Let's hope they don't plan on retiring anytime soon.

Just Business is showing at Cape Town's Artscape Arena until 28 July, 2012. Special discounts are available on Thursday, 19 July (free entrance via az.oc.naargnavekim@ofni if you make any cash donation you can to the Theatre Benevolent Fund after the show), Friday, 20 July (R50 for tickets through Artscape's Box Office on 021 421 7695), and Saturday, 21 July (buy three tickets for R85 each and get a fourth one free). Tickets are also available from Computicket. The production is not suitable for children under the age of 16. 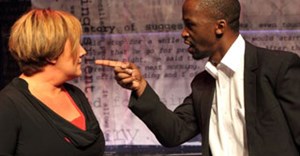