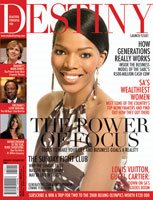 The magazine is divided into five clear sections, referred to as Business, Business Life, Retail Therapy, Home Organiser and Downtime, to appeal to the multi-faceted and exciting lives of self assured, affluent and stylish South African women managing multiple roles and multiple identities. The Destiny reader is an ambitious, globally-aware and intellectually-curious woman who is either interested in or actively engaged in business.

The strong editorial and administrative team will be led by Dhlomo as founding editor and managing director of Ndalo Media. Sharda Naidoo is deputy editor. Prior to joining Destiny Naidoo was assistant news editor on The Sunday Times Business Times and previously was also business editor of the Johncom group.

Business editor is Cara Bouwer, who was previously with Business Day as the deputy special projects manager, and features editor is Sheena Adams, who has worked as a news journalist, political correspondent and features writer for The Star and other titles in the Independent Newspaper Group.

The magazine's senior lifestyle editor is Aurelia Dyantyi, who has also worked for The Star as a health and lifestyle reporter. On the administrative side, Elaine Chandler, formerly with Johncom, is operations manager while Charlotte Mapitsa, previously with Multichoice, is financial manager.

"Gap in the market"

Says Dhlomo, “I've always been passionate about media and while completing my MBA I saw a gap in the market to create a magazine that effortlessly combines business with lifestyle content and Destiny is able to achieve this. The magazine's key differentiator is business coverage that is useful, accessible and engaging without being dumbed down.

“Our core readers are focused, spirited and intelligent women who are proud of their femininity and the power it gives them,” concludes Dhlomo.

Destiny will retail at R26.95 (including VAT) and will be available in store nationwide at leading retail outlets from Tuesday, 16 October 2007. The first two issues of Destiny will be published bi-monthly, with the first issue being a November-December edition and the second a January-February edition. The publication will move to a monthly frequency with its March 2008 issue.

The launch of the magazine will be supported by a tactical above-the-line campaign to feature across television, radio, online, billboard and print media; this breaks on Monday 15 October. The magazine will also have an online component with the introduction of a new website, www.mydestinymag.com which goes live on Wednesday 17 October.

Destiny magazine will also be available in several African countries, including Zambia, Malawi, Kenya, Tanzania, Nigeria and Namibia from the launch issue onwards.