3 Sep 2007 | Email | Print |  PDF
Winners of the inaugural Sanlam SA Fashion Journalism Awards, announced Saturday night, 1 September 2007, at the Sanlam Fashion Show at the Sanlam SA Fashion Week, are Tamara Rothbart and Arthur Malan. Rothbart won the category for written fashion journalism for her article, The New Style Democracy, published in Elle SA and Malan scooped the fashion editing section for his Horse Play fashion feature which appeared in GQ.
Each category winner will receive a cash prize and an opportunity to visit Paris to coincide with Paris Fashion Week 2008 to the value of R25 000 each.

“We were particularly pleased with the response to the call for entries, especially in the written category. We received entries from newspapers and glossy magazines as well as electronic media. It was good to see such a wide range of features, from lifestyle articles to well-informed business articles on the fashion industry and the challenges it is facing,” Chang commented.

“The winner, however, was a unanimous choice for the panel. It was written with insight and had effortless style, which is almost a pre-requisite when writing on fashion.”

“The editing award took a little more deliberation. Editing fashion is a tricky combination of choosing the right garment, providing information for your reader, and then translating that message into visuals that elicit an emotion. Our winner in this category added a subtle sense of humour to a spread that was edited with consummate skill,” Chang said.

“While there is a tradition of recognising fashion editing, the Sanlam award is the first accolade to recognise written journalism about the fashion industry. We were particularly gratified that entries in this category ranged from business articles examining bottom line issues to articles exploring the socio-cultural environment of fashion,” he reported.

The five finalists in the two categories were:

According to Themba Gamedze, chief executive: group marketing and communications of Sanlam, fashion is often regarded as a frivolous topic which receives superficial coverage. “In reality it is a highly competitive, multibillion dollar global supply chain and lifestyle business. With our local textile and manufacturing industries under siege, Sanlam believes it is appropriate to contribute to raising awareness of local talent by encouraging high calibre reportage,” he said. 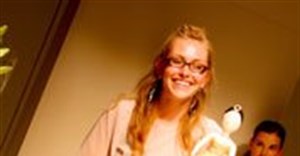