Image by Dominic Barnardt: Winner Linze Veenstra
Throughout the event’s seven-year history, this was the first time it snowed throughout the weekend, something not often experienced in Southern Africa, making for an interesting as well as an incredible weekend.

Friday’s practice kicked off in near perfect conditions as partly cloudy weather closed in and light snowfall began to cover the resort. On Saturday’s official competition day, Afriski woke up to a snow-covered resort and snowfall that would continue throughout the day and into the evening. Although an amazing experience, this did not fall into the hands of the competitors who had to deal with low visibility conditions and slow running Slopestyle park.

The South Africa Para Surfing Championships results are out!

The decision was made to run the competition as quick as possible by narrowing it down to a two-run format instead of the usual three-run format. The resort’s Kapoko Park course included five platforms that featured a host of rails, boxes and kickers offering a fun course that allowed competitors to progress through their runs.

Judges took style, technicality and use of course into account when awarding points. Consistency was key in the weather conditions and riders that were able to put down solid runs while making use of all the features in the park scored the podium places. In the premier Pro Men’s division, Andrew le Roux made his return to competing at Winter Whip and took a convincing victory. His runs consisting of a switch nose boardslide, switch front 270 on the flat to down, boardslide over the Rainbow and Hardway Front 360 saw Le Roux score the highest points of the competition.

Wesley Schallen went all in attempting a 50-50 to Frontflip off the tanker feature in his first run, unfortunately going down, but back-to-back Backflips off the kickers in his second run secured him the 2nd place finish. Japan’s Shotaro Koyama, who came 3rd in the last Winter Whip competition, retained his 3rd place title with solid scoring runs through the park.

The biggest field of the day was in the Open Men’s division which saw a closely fought battle for the podium. In the end it was Nick Brodie and his 720 on the Butter Box, Tailgrab and Method that took the win over England’s Meka Ejindu and defending title holder Dean Cowley who finished in 2nd and 3rd respectively. Mawa Jekot was also back to competition in the Ladies division and, although dealing with Flu, managed to secure the overall win with her runs featuring a Lip Slide, Nose Slide over the Rainbow and stylish Method Air over the kicker.

Bronwyn Rassmann went down early in her runs but pieced together the rest of the course to finish in 2nd place. Paige Verpoort, in her first ever Slopestyle contest rounded off the podium in 3rd.

It was great to see a strong contingency of local Lesotho skiers competing in both the Ski and Junior Ski divisions and battling for podium positions. The Ski division was again dominated by Linze Veentsra, aka JTK, who’s stylish riding on the rails and back-to-back Backflips on the kickers took the win. Veenstra’s Switch Backflip in his second run also secured him the Best Trick of the competition and awarded a GoPro Max. USA’s Gillean Szwedamittels slotted into 2nd place with Kabai Mokolo taking home 3rd. The weekend was topped off by the good vibes on the slope thanks to the Red Bull DJ’s, the afternoon après-ski Andiamo Spritz Party on the Snow, and the official After Party that took place in the Gondola Café.

Event organiser, Ryan van der Spuy commented, “It was so good to be back at Afriski and what an amazing experience with the amount of snowfall we had. We’re stoked to have been able to run the Slopestyle competition in the conditions we were dealt and it worked out in a fun-filled four days. Winter Whip is back and we’re looking forward to what the future holds! Thank you to our event partners for making this possible; Andiamo Spritz, Red Bull, GoPro and DC Shoes, and a massive shout-out to everyone that made it out to the resort. See you next year.” 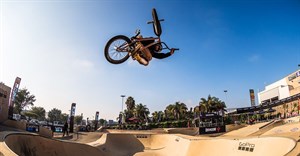