By: Eugene Yiga
What began as a low-key London production 40 years ago has grown into a musical sensation that's been performed in over 30 countries, turned into a film, and inspired an episode of Glee. I'm talking about The Rocky Horror Show, now playing at Cape Town's Fugard Theatre to screams of absolute delight. 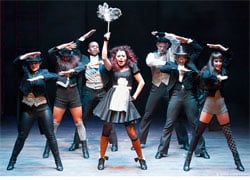 The South African cast features Paul du Toit (Same Time Next Year) as Brad, Jenny Stead (Cardenio) as Janet, and Brendan van Rhyn (Cathy Specific in Madame Zingara) as Frank-N-Furter. Van Rhyn's portrayal of the "sweet transvestite" earned him a Naledi Award nomination five years ago and he's thrilled to be back in the size 13 heels.

"It's another great chapter in my life and time in my career," he said in an interview with The Writing Studio. "It means once again being part of an ensemble cast, which is a great experience; sharing that stage with others, feeding off them, and giving the audience exactly what they came to see: the world's favourite and most-loved rock 'n roll musical!"

So much to love about this production This staging is produced by Eric Abraham (Kat and the Kings) and directed by Matthew Wild. "[We] have drawn inspiration from the show's original aims and context, paying particular attention to the B-grade science fiction and horror movies [that] Richard O'Brien celebrates and parodies in the piece," Wild said.

Indeed, there's so much to love about this production - acting, singing, dancing, costumes, set, video and graphic design - that it's hard to know what to praise first. The only minor drawback (other than a silhouetted scene that might be too sexy for its own good) is that some of the music from the live band was so intense that it drowned out the vocals a few times.

An interesting aspect of The Rocky Horror Show is the high level of audience involvement, a feature that's been around since midnight screenings of the film. That's taken to new extremes at the recently renovated Fugard Theatre, with many people getting dressed up (i.e. arriving in their underwear) or being so preoccupied with their "participation packs" that they seemed to forget they were there for a show.

Ultimately, despite a few moments when rowdiness runneth over and the crowd completes the lines on stage, it's all in good fun. It's no wonder that even those who aren't particularly familiar with The Rocky Horror Show are likely to leave the performance ready to do the time warp again and again and again!

Eugene graduated from the University of Cape Town with distinctions in financial accounting and classical piano. He then spent over two-and-half years working in branding and communications at two of South Africa's top market research companies. Eugene also spent over three-and-a-half years at an eLearning start-up, all while building his business as an award-winning writer. Visit www.eugeneyiga.com, follow @eugeneyiga on Twitter, or email moc.agiyenegue@olleh to say, um, hello.
Read more: The Rocky Horror Show, Rocky Horror Show 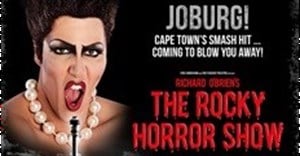 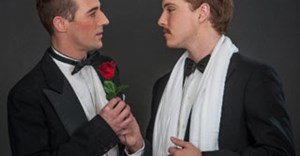 Boy Meets Boy is a marriage made in heaven4 Jul 2013