By: Eugene Yiga
"Early church people called it "Duiwel's musiek" (Devil's music) because it's associated with dancing under the moon and all the traditions that used to exist. The church comes along and says you shouldn't be dancing under the moon like that. You should be in church playing gospel hymns." In case you're wondering what award-winning entertainer David Kramer is talking about, I suggest you join him in Kalahari Karoo Blues at Cape Town's Baxter Theatre.
It's taken two years to create the show but its beginnings go back over a decade. In the early 2000s, filmmaker Jan Horn was making a documentary about indigenous South African music. Kramer accompanied him and was fascinated by the way that musicians from small Karoo and Namaqualand towns tuned and played their instruments. "I was surprised that this old music still existed," Kramer said. "I decided to invite them to perform with me." The result was Karoo Kitaar Blues, a concert series that incorporated the music featured on TV.

Back to the present and Kramer is playing alongside a new range of musicians from South Africa and Botswana. They include Oteng Piet (one-stringed Kalahari segaba), Ronnie Moipolai (upside-down guitar styling), Babsi Barolong (fenjoro, a handmade violin), and Hannes Coetzee (whose music has been covered by Grammy winners Carolina Chocolate Drops). There's also Vredendal folksinger Mary Kriel (who drums a coffee tin) and the Sonskynsusters Ruth Hector and Elspeth Davids. (All this is accompanied by lead guitarist Gammie Lakay, bass guitarist Howard Links, and percussionist Wildrew Maya.)

Sounds that can sometimes make your teeth hurt

So, what will people think of this music? Kramer acknowledges that some "urban ears" might dismiss it as a crude attempt to copy something Western. Some might also struggle with unstructured songs that keep going ("until the spirit is gone", as the previous performers used to say) and sounds that can sometimes make your teeth hurt. And yet, even though it might not always sound pleasing (or be sung in a language you understand), the passion is always there. "This music is about losing yourself," Kramer explained. "I'm overwhelmed by the authenticity and the unpretentiousness of it."

It all comes down to the performers. They aren't polished professionals; just ordinary people who do what they like and love what they do. (I don't think I've ever seen an 80-year-old dance with that much energy!) They're so connected in their passion for the music that they were even able to collaborate on one song despite not speaking the same language. "This is not about someone trying to impress an audience," Kramer said. "It doesn't make any difference that they are performing just to me or to 1200 people. The music envelopes them and that's what the audience is experiencing as well."

In the end, Kalahari Karoo Blues pays tribute to the original performers who have since passed away. The show also aims to preserve music that is at risk of dying too. There isn't a lot of recorded music like this around and the songs aren't always passed from one generation to the next. So do yourself a favour and enjoy this unique experience before it's too late. 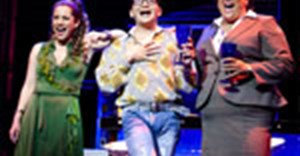