Eugene Yiga: You've had an amazing career, received awards more times than one can count, and currently hold four honorary doctorates. What would you say is your biggest professional highlight so far?

John Kani: It would have to be winning the 1974/75 Tony award on Broadway for Best Actor for Sizwe Banzi is Dead and The Island - and, of course, receiving the Order of Ikhamanga in 2005 from President Thabo Mbeki in recognition of my contribution in the struggle for the liberation in South Africa through my work in the arts, especially my contribution to a non-racial, non-sexual and democratic South Africa. 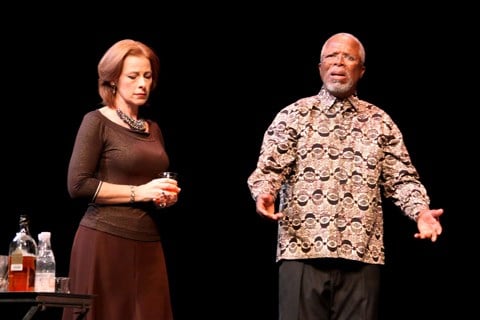 And if you had to choose between writing, directing, and acting, which would it be?

Definitely acting. It is wonderful to be on the stage and feel the relationship with the audience. It is that relationship that becomes the wind beneath my wings and lets me fly like an eagle.

Missing is the first full-length play you've written since 2002. What was your inspiration?

It came out of a conversation that I had with former President Mbeki when I asked him what the possibility was that someone (referring to South Africans in exile) could have been left behind. Was it possible that somebody could have been forgotten and was not called back like a soldier missing in action? And he said it was possible and it was this that stayed with me and inspired the story.

Did you find that the process was different in writing this play compared with writing Nothing But the Truth?

One's work is really like one's children - making them can be like the same process, always rewarding and it is certainly different with every child. So, having already experienced Nothing But the Truth it helped me to outline the map for Missing. I learnt the tricks from before.

And were there any specific themes or premises that you set out to explore?

The challenge of telling the truth even when it is uncomfortable was important for me in the process. When writing one is telling other people's stories, so you have hang on to your own truth relating to the story so that the journey of the characters become believable and honest and consistent. As the story is told the characters develop. So it was about staying true to this story that helped to develop the themes and characters. Did you write the leading role of Robert specifically for yourself? Or did the casting decision only happen afterwards?

I knew that once I asked Janice Honeyman to direct and Mannie Manim to design the lighting that it would end up a non-negotiable for Janice that I play Robert. We have worked together for so many years with great success. It was only after the first draft that I decided to tackle the role as I did not want John Kani to interfere with Robert Khalipa's character.

And what would you say are the challenges of having to act out your own script as opposed to someone else's?

When I am in rehearsals I say goodbye to the writer and only the actor is in the room. I do this so that I can be fair to the team and mostly to the portrayal and development of whatever character it is I am playing.

The Cape Town run was a major success, although the opening night involved a power failure that forced you to perform under the Baxter Theatre's emergency lights. What were you reactions at the time?

What a wonderful opening it was at the Baxter with the power failure! It reminded me of the 1960s and 70s when I performed in New Brighton, Port Elizabeth, where I grew up and started my career. In those days there was one floodlight in the auditorium or hall and one on the stage, so the audience was visible throughout. I could see the eyes of each and every audience member and it felt like storytelling. I must admit the collective and spontaneous response from the audience at the Baxter opening was quite wonderful.

And what's next for you after Missing's Joburg run?

There are few irons in the fire - my agent has a few options in the pipeline. I am, however, excited that for the first three months of next year I will be directing Sizwe Banzi is Dead, which will tour the US and star my son Atandwa Kani opposite Mncedisi Shabangu in those roles that Winston Ntshona and I played 42 years ago. Nothing But the Truth's tour will also become a reality.

Missing (PG-16) is at Johannesburg's Market Theatre until 13 July. Book at Computicket.