Celebrating 20 years of an iconic blend

By: Eugene Yiga
Most people will remember 2014 as the year that South Africa celebrated two decades of democracy, but it also happens to be a special year for a special wine.

While he was cellar master at Boschendal, Achim von Arnim discovered the Franschhoek Valley's potential for making top-class Méthode Cap Classique. And so, after purchasing Haute Cabrière in 1982, he replanted the vineyards in the tradition of the famous French Champagne houses: Chardonnay in the decomposed sandstone soils on the left side of the farm and Pinot Noir on the stony, clay-rich, west-facing slopes. 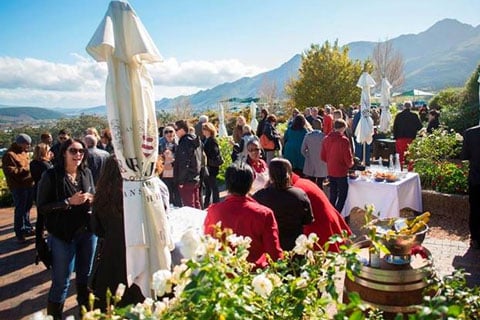 The result was Pierre Jourdan, named in honour of the original pioneer who acquired the estate some 300 years earlier. And, as von Arnim continued under the belief that wine is not made but grown from a combination of sun, soil, vine, and man, demand continued to rise.

But tragedy almost struck when an unexpected heat wave in 1994 threatened to put the estate out of business. "The grapes ripened so quickly that we couldn't keep up harvesting, so we ended up with a portion of our base wine that was not suitable for our Pierre Jourdan range," Von Arnim recalls. "But we had to market our crop in order to bring in the money to repay our loan."

True to his bubbly personality, Von Armin decided to turn lemons into lemonade by bottling this portion of wine as a still blend of 60% Chardonnay and 40% Pinot Noir. And so was born a wine of elegance and intensity, with ever-shifting colours, zesty aromas, and a rich taste. Praised for its versatility

While most wines tend to be ideal for only certain occasions and dishes, Haute Cabrière's Chardonnay Pinot Noir is praised for its versatility. It was hard to believe that the blend paired so well with each part of the long-and-leisurely celebratory lunch: from the tapas platter with impossibly thin aubergine chips; to the French Bouillabaisse with mussels and prawns; to the spread of breads, cheeses, and a smorgasbord of sweet things (including lemongrass ice-cream) for dessert.

More than that, what makes the wine so special is how easily it goes down. "At 12.5%, it's a blend one can drink by the bucket," someone quipped during an introductory speech. Indeed, as guests took refuge in the cavernous restaurant, the wine flowed as freely as the crisp winter air, refilling itself as if by magic and charming its way into glasses throughout the afternoon. "It's a wine that keeps getting better," Von Armin's eldest son (and new cellar master) Takuan said. He swirled and took a sip. Even through lenses tinted from the sun, his eyes lit up in parental pride. "Other wines can be pretentious, but ours is about having fun." It seems that the success of his first solo creation can only mean one thing: expect a lot more reasons to celebrate in the years to come!

Haute Cabrière is located just off Lambrechts Road (R45) in Franschhoek. Visitors can experience the full range of wines and Méthode Cap Classiques at the tasting venue or join daily guided cellar tours and tastings, some of which include an impressive sabrage demonstration. Call +27 (0)21 876 8500, email az.oc.ereirbac@snoitavreser or go to www.cabriere.co.za.