Lots of LOLs in FBPK

By: Eugene Yiga
Comedian Martin Evans, recently seen on Comedy Central and the South African edition of Come Dine With Me, gets up close and personal in FBPK. If you want to know why his new one-man show won a Standard Bank Ovation Award at the National Arts Festival (or what FBPK stands for in the first place), it's now on at Cape Town's Kalk Bay Theatre. 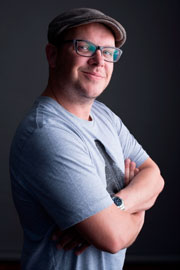 The one-hour performance tells the story of a devastating accident that left Evans in hospital for most of 2010. "If you've ever been stuck in a wheelchair for six months [and] had your legs broken in 20 places, then you can imagine the biggest eye-opening knock you can get," he said. "Not being able to do anything for yourself, being helpless, is the biggest wake-up call in life."

It sounds kind of depressing, especially when we learn that his wife-to-be left him for their housemate and that he got over it by baking cupcakes flavoured with the salt of his own tears. But there's quite a bit of inspiration (with a random diversion or two) along the way. "There are all the negatives you can sit and moan about, but I chose to make comedy out of it," Evans said. "It's uplifting, happy, and I've never had somebody who was offended by it."

Why would anyone be offended, you might be wondering? Well, FBPK stands for "Full Body P**s Klap". The rest of the language isn't as extreme as I expected and his impersonations of the Afrikaners, although somewhat stereotypical and potentially offensive for wearers of two-tone shirts, are done quite well considering that Evans is from the UK. But FBPK works because Evans is able to make the audience a part of his story. You might as well be chatting to an old friend at the bar. So pull up a chair and get ready to be entertained. It's all in good fun!

FBPK (PG-16) is on at the Kalk Bay Theatre in Cape Town until 25 November. For details and bookings, go to www.kbt.co.za