11 Mar 2016 | Email | Print |  PDF
South Africa's first developer-only DevConf exceeded expectations with over 500 developers turning up and a host of others who were unable to secure seats pre-booking for next year.
DevConf was initially expected to attract around 350 professional developers and programmers when it was staged at the new Riversands Incubation Hub in Fourways this week. However, within weeks of ticket sales opening, the event was oversubscribed, with scores of developers on a wait list, and yet more asking to buy tickets for the 2017 event.

“We were pleasantly surprised at the response,” said co-organiser Robert MacLean. “It supported our feeling that while there are many small, niche events held for developers around the country, there was a need to bring back to SA a major, vendor-neutral developer conference.”

The conference grew out of the Developer User Group forum and monthly meetings coordinated by MacLean, Terence Kruger, Mark Pearl and others – all veteran developers themselves. In collaboration with the user group and event sponsors, the organisers identified the top issues and skills development needs among local developers, and addressed them in the one-day, multi-track event. DevConf included tracks focused on DevOps and Automation and Teams and People, as well as tracks on Crafting Code, Persistence and Data, Tools and Frameworks and a sponsor track.

Regular industry updates and knowledge sharing are vital for the developer community, says MacLean, making platforms like DevConf an important highlight. “It is vital for developers to expand beyond their niches. In addition, technology becomes out of date so quickly that developers have to stay on top of new technologies, new ways to plan and assure project success.”

Opening the event, keynote speaker Danie Roux – consultant and expert in the developer community, explored the construction of meaning, noting that “there is a distinction between being correct and being useful.” In some respects, he said, every model from agile to waterfall was wrong, “but some of every model is useful. We need to make abstractions to make something slightly more useful,” he said. 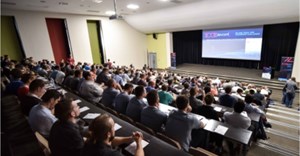