By: Michael Britton
Steve Newman, being the legendary guitarist he is, needs no introduction to lovers of acoustic guitar. He is currently in Cape Town, teamed up with Greg Hadjiyorki Georgiades and Ashish Joshi, to play four gigs at The Forge in Kalk Bay. 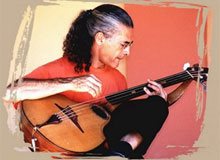 Steve and Greg have played together before, as half of The Aquarian Quartet, while Greg and Ashish have played together as the duo Strings and Skins, and with McCoy Mrubata on the brilliant Vivid Afrika album. Newman, Georgiades and Joshi, as a trio, are a new exploration of musical styles and influences.

Always interested in new musical combos in South Africa, and the magical journeys they offer, I was at the Forge for the opening night of the Cape Town gigs. Wow! These guys are a revelation. They are all superbly talented, display complete mastery of their instruments, and combine to produce exquisitely complex and haunting rhythms.

I have heard Ashish Joshi play on albums, but this was my first opportunity to see him perform in public. Sitting cross-legged, with his Tabla in front of him and Darbukah, Dhol and Zarb (Arabic and Iranian drums) arranged around him, his fingers are alive, even when still. He plays his instruments with a subtlety and sensitivity that is entrancing. This man is no crash-bang drummer. Each finger has a role, and often seems to operate independently of the rest of the fingers on the hand. Yet they combine to coax the most incredible rhythms from his drums - adding an undeniable Eastern and North African flavour to the tunes.

I have followed Steve Newman's career for 30 years, solo and in various groupings, from the early days of the Barleycorn Music club, through gigs on remote farms in the Waterberg, to concerts in South Africa's Botanical Gardens, and would think his music had no more surprises for me. Yet he still finds ways to astound me, to turn my complacency upside down. His playing with Georgiades and Joshi demonstrated an intensity and calmness, contradictory as this may sound, that left me tingling with awe.

Greg Hadjiyorki Georgiades is equally at home on any of the stringed instruments he picks up, and he was constantly exchanging guitar for oud, (a North African fretless lute), bouzouki for oudtar (a custom-made combination of an oud and a guitar). Each of these instruments has a neck of a different length, and a different number of strings. This contributes to the tonal range of the trio as a whole, but how he manages to switch so easily from a six-string guitar to an eleven-string oudtar, from an eight-string bouzouki to the twelve-string oud, is beyond my comprehension.

No egos are involved in their music, each listening and responding to the other, alternately interweaving and leading, allowing the music to dominate. I was reluctant to leave when the gig was over, but left with a lightness and joy in me. It was only when my daughter asked what I was grinning at, that I realised that I had probably been smiling from the first chords.

These three talented musicians are currently touring South Africa with a view to releasing an album at The National Arts Festival in Grahamstown later this year. The tracks for the album are being recorded at the series of live gigs at The Forge in Kalk Bay. For bookings and further information , and an unforgettable musical experience, contact Kerry Friedmann or 082 455 3447. Tickets cost R110 for each show. 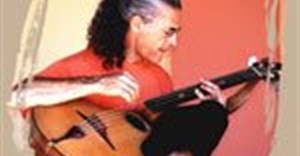