By: Lauren Hartzenberg
The anticipated launch of Ikea's Överallt homeware collection is described as a marriage between African rituals and Scandinavian design. Unveiled at Design Indaba in Cape Town last week, the project is a collaboration between the furniture giant's in-house designers and a group of talented creatives from five African countries, including South Africa. The Överallt range comprises larger pieces of furniture, tableware, textiles and even a sustainably-made tote bag. As the departure point for the collection, the designers looked at modern urban rituals and their connection to socialising around food, indoor and outdoor living; and the rituals around expressing identity and sustainability.

The results of this exploration appear in the form of baskets made from faux hair braids, a bench designed to encourage socialising, and textiles inspired by the African environment.

The ten African creatives responsible for the Överallt collection hail from various design disciplines – from fashion to sculpture and architecture. Two years ago, when Design Indaba was briefed by Ikea to source the designers for the project, Design Indaba founder Ravi Naidoo says they didn’t necessarily look at furniture designers, but instead picked “good thinkers”.

“We were agnostic as to the medium and particular discipline, we just found people who were really going out there and doing the high-wire act, taking risks and expressing themselves, and represented the best of the African creative guard,” Naidoo explained when speaking at the launch event. Also present at the Cape Town launch event was Ikea creative leader James Futcher, who spearheaded the Överallt project. He said that the furniture giant wanted the design collaboration to be a learning and sharing process for all those involved.

The designers from Africa contributed their ideas for the collection while the designers from Ikea guided the development process. All of the Överallt products were developed with Ikea in-house designers Johanna Jelinek, Kevin Gouriou, Hanna Dalrot, Mikael Axelsson and Ina Vuorivirta.

“Our role from Ikea has been to show and lead the way in making products that are suitable for mass-production." This presented a learning curve for the guest designers, according to Jelinek.

A large percentage of Ikea products sell an average of 2 million units worldwide. For the group of African creatives, who mostly run boutique operations that make small lines in limited numbers, the idea of ‘scaling up’ presented the first major hurdle for the designers, Naidoo said. Another key guideline for them was the need to adhere to the “democratic design” principles that underpin Ikea products. “It's not about just making beautiful products with a great form. At Ikea, it's so important that we have a great function. If it's something we're going to be sitting on, it needs to be comfortable,” explained Futcher.

“And then it's about quality - picking the right material so it lasts over time. And sustainability… how can we limit our impact on the environment? But the biggest thing that we wanted to share with the designers is that we at Ikea want to make design accessible to the many people, and it's about having products at a great low price.”

In his opening statement at the launch, Naidoo said that Ikea – like many others outside of the African continent – is perceiving an African cultural moment. “They're interested in what's rising from the tarmac here in Africa and could feel the sense of a coming-out parade of African creativity. They wanted to capture this in some way.”

“Africa is now. Our time has come,” he exclaimed.

The theme of outdoor living is also a strong thread for the Överallt collection, one that emerged at a workshop during the early stages of the product development process.

“We sat down and we shared stories from our every day," said Naidoo. "One thing that emerged is that there was a merger between the inside and the outside and so much about that African experience is in that interstitial space between the front door and the street. So a fair bit of the collection represents outdoor living.”

The idea behind Bibi Seck’s rocking chair and footrest was born while he was sitting in his mother’s garden in Dakar, Senegal. In Western Africa, where he grew up, there’s a more reflective attitude towards time; space to sit in stillness, reflect and allow thoughts to flow freely. Selly Raby Kane's product is inspired by the tradition of weaving hair. The Senegalese designer’s baskets, available in two sizes, are made from textile fibre designed to look like braided hair. 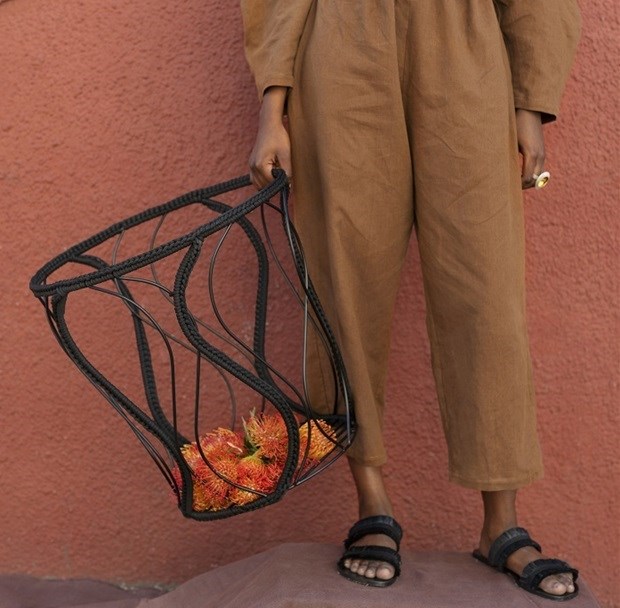 Issa Diabaté, an architect and designer hailing from the Ivory Coast, designed a simple chair that reflects the African approach to living outdoors and indoors. Made using only a single sheet of plywood, the chair is designed to be tailored to its user's needs. Mariam Hazem and Hend Riad, of Reform Studio based in Egypt, designed their jute rug and tote bag using shimmery woven strips of thread-like material that’s made out of hard-to-recycle waste material from crisp packaging production. South African designers Renee Rossouw and Sindiso Khumalo created textiles based on the African environment. Khumalo looked to South African cities – Johannesburg in particular – to generate her bold patterns, while Rossouw was interested in the form of the African elephant. The ‘Bench for More’ by Bethan Rayner and Naeem Biviji is inspired by a Kenyan evening ritual in which friends often gather, bringing their own chairs to talk about their day and life in general. Its slightly curved design enables you to arrange several benches together to form a circle around the matching table. Rayner and Biviji also created a range of products designed for flexible cooking and dining, "in the spirit of utility and flexibility", including a cast iron dish with a lid that doubles as a skillet and a trio of cork pot stands. Laduma Ngxokolo, South African designer and founder of fashion brand Maxhosa by Laduma, contributed textiles featuring his signature geometric patterns inspired by his upbringing in the Eastern Cape and the journeys he’s made. The limited-edition Överallt collection will be made available in Ikea stores worldwide in May 2019. Sadly, there are no concrete plans to make the range available locally. 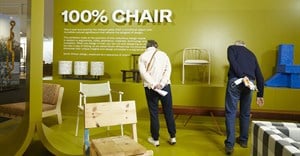 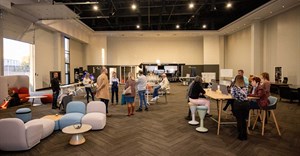