4 Jan 2010 | Email | Print |  PDF
Parker's Comedy & Jive welcomes in the New Year with a bang as rising local comedy star Loyiso Gola takes to the stage in January alongside an impressive list of local acts. There's a return for international favourites, Brit Mandy Knight (21-23 January) and US star Griff (28 - 30 January) who return to pick up where they left off on their wildly-successful runs at Parker's in 2009! 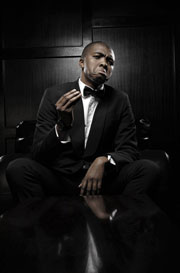 Loyiso Gola's (14-16 January) unique sense of humour and frank observational commentary has established him as one of South Africa's most talented comedians.

Loyiso has been performing stand-up comedy for 8 years and has graced the stages of all the major festivals and events on the local comedy calendar. His one-man shows, including “Loyiso Gola For President” wowed audiences nationwide and scored him a South African Comedy Award.

His rise on the comedy local rankings has been nothing short of meteoric. From humble beginnings performing with the Cape Comedy Collective on the Cape Town comedy circuit "while he was still at school", he has evolved into a comedy phenomenon performing all over the country as well as having been on television, radio and the big screen. The comedy fraternity was first made aware of his talents when he won the Sprite Soul Comedy competition and was the runner up in the professional category of the Freshest Five Comedy Competition literally upon his arrival in Johannesburg in 2003 at the age of 19.

Mandy Knight (21-23 January) was trained at the Webber Douglas Academy of Dramatic Art. The classically-trained actress decided to initially work in stand up comedy because she has “a deep fear of ending up in crap fringe theatre - where actors spend a lot of their time in rehearsals running around exploring their inner child with the use of a silk scarf and a tambourine”.

Mandy was rated by Time Out Magazine as “Best Female Comic” and was the very first female comic to MC at The Comedy Store. As a television actress, Mandy appeared as a main character in Jo Brand's “Like it or Lump it” series. She has also appeared with David Baddiel in his last series “The Baddiel Syndrome” and written for television shows, most recently for Carlton TV's 'Des and Mel Show'.

She has used her talents as both a stand up and fine character actress to perform four one-woman shows in Edinburgh, London and Sydney.

Griff (28-30 January) is a native of California who now resides in Atlanta, Georgia. Blessed (and cursed) with a raspy baritone voice, this insomniac headliner's quick wit and sometimes-dark improv is a sure-fire hit. He claims to be the only African American who knows what the sport of cricket is ...and probably one of few Americans who knows that Johannesburg downtown area makes New York City look small!

Comedian by night and morning show radio personality by day, Griff has opened for major acts like The Kings and Queens of Comedy and DL Hughley. He was nominated for an Emmy Award for his commentary on the “Street Skillz” radio show and hosted Fox Sports' “Thunderbox”

Parker's Comedy & Jive is situated near the cinemas at Montecasino at Shop 24, next to the Boogaloos Skate Park and across from Sweets from Heaven. Bookings are now open via Computicket (www.computicket.com) and admission fees vary between R80 and R100. For more information, visit www.parkerscomedy.com or call (011) 511 0081. Lineups subject to change at short notice.
NextOptions
›
Email Print PDF
Don't miss BizTrends2022 - 7 keynote speakers forecast trends shaping business in our region! Register now! 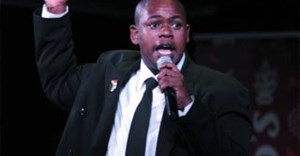