All the SA Bar Awards winners

28 Sep 2020 | Email | Print |  PDF
The SA Bartending Accolades and Recognition (Bar) Awards recently announced the winners of its 2020 instalment.
The SA Bar Awards was held as an online event, this year, with nominees and their fans experiencing the event programme through regional watch parties that brought reflection on a tough year and celebration of the exceptional talent that exists in the local drinks industry.
Votes by a judging panel of experts resulted in a shortlist of four nominees for each category, with the ultimate winners announced on the night.

“The calibre of nominees this year shows the depth of talent, creativity and diversity in the South African scene,” says Travis Kuhn, director of the Bar Awards. Kuhn manages the awards alongside event industry stalwarts, Ophelia Ross-Simms, Howard Ross-Simms and Leigh Kuhn.

“The winners have shown true dedication to their craft and customers, and we couldn’t be more excited to provide a platform that elevates the profession of bartending in this country, especially after the trying year that the industry has had.” Vicious Virgin, the bar in Wale Street, Cape Town, that walked away with the Newcomer and Team of the Year awards, sadly had to close its doors in July due to the devastating impact of the pandemic. Sadly, a fate shared by many outstanding outlets around the country.

We know this year was very tough on the bar industry, but we also know there is so much world-class talent and craft worth supporting and protecting. For this reason, we have set up a fund from monies received from sponsors that were traditionally used for hosting our normally glamorous awards event. The fund will allow those most affected in our industry, businesses and people who were left with little to no income during the lockdown, to apply for financial support that can hopefully help towards some relief. We are also focusing forward on ongoing initiatives to promote excellence, safety and upliftment, to elevate the industry for long-term success,” said Kuhn. 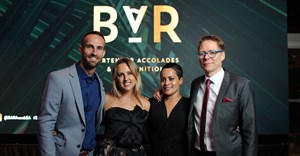