18 May 2012 | Email | Print |  PDF
Two of South Africa's most pressing needs, namely the need for sustainable, low-cost housing and the need to divert recyclable materials away from the country's landfill sites which are rapidly approaching their fill capacity, have found an unlikely common solution in recycled expanded polystyrene (EPS). 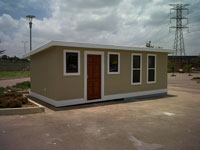 Until recently, the Polystyrene Packaging Council (PSPC) has been struggling to develop markets for used, post-consumer polystyrene. "One of the biggest headaches we faced when talking to recycling companies and converters, was the need to wash and dry the contaminated polystyrene - typically used in the manufacture of take-away hamburger clamshells or disposable coffee cups or food trays," explains PSPC director Adri Spangenberg.

However, the high cost of electricity and water in our country did not make it a viable financial option for smaller recycling plants to invest in infrastructure that would mechanize this entire process, resulting in much of the used polystyrene either being sent to landfills or exported to countries such as China and India for recycling.

Tested by the CSIR

Thanks to research, design and development that has been done by Tower Technologies at the CSIR, first series or demonstration homes have already been built and undergone extensive testing, yielding positive results all around. The size of the standard two bedroom house being built is 26m² and weighs 1.6 tons. It contains 5% EPS regrind which is thoroughly mixed with concrete to form walls that are almost indestructible.

"As a result of the breakthrough technology and applications developed by Tower Technologies, we will be in a position to harness the insulation properties and other characteristics that make polystyrene unique low cost housing construction projects," says Spangenberg. "Thanks to the fact that there is a readily available stream of used EPS in our country, we are able to provide more than enough material for the pilot phase of this initiative which will see low cost homes being built many around the country."
NextOptions
›
Email Print PDF
Read more: Adri Spangenberg, Polystyrene Packaging Council, low-cost housing